You ever notice how Hollywood bends over backwards to redeem monsters like Mel Gibson and Matt Lauer (men), no matter how horrific their behavior, but Meg Ryan got banished to the Phantom Zone with Alison Lohman for living past 35?   Well, I won't have it.

We must respect our Queens.  Too many have been left behind.  I've touched on my love affair with Return of the Living Dead: Part 2 before, but since it's finally been released on Scream Factory blu-ray, I think we need to dig deep and pay respect to one of our truest Queens, Suzanne Snyder. 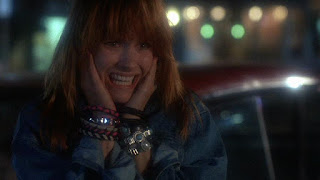 I was profoundly affected by Suzanne Snyder's performance in Return of the Living Dead Part 2.  I must have been 8 or 9 when I first saw it at the neighbors house and something snapped!  My imagination unleashed in all directions, filling in the gaps, creating my own story for weeks to come.  Those were the years when I went to a Catholic School and the nuns had to call my Nana in to talk about my affinity for pretending to be Suzanne's character in this film on the playground.  I'd run around pretending to be looking for my boyfriend in a myriad of bangles while there were zombies everywhere around me.   The other kids would throw rocks at me and steal my accessories.  It was bad, but also fabulous.  I've never felt so alive.

8 year old Jeffrey LOVED her performance for the same reason I worshipped Capshaw in Indiana Jones 2 - her performance trades in histrionics.  Both Snyder and Capshaw operated on a vulnerable, happy/sad frequency that only gay boys can hear.   My elders had Judy Garland and Ethel Merman, I had Suzanne Snyder.  It wasn't until years later that I pieced together that she was also in Night of the Creeps - another classic cable rerun gay horror film from my childhood. 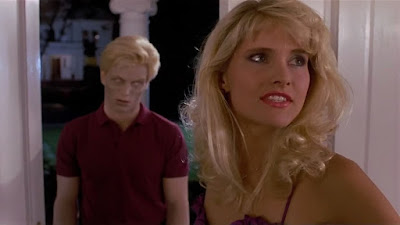 In the spirit of full disclosure, I hadn't seen her work in Killer Klowns from Outer Space until a couple years ago when it was playing on one of the TVs at Halloweentown in Burbank.  I had to put down my scented candle so I could stand there like a crazy person, taking in every moment.
What a star! 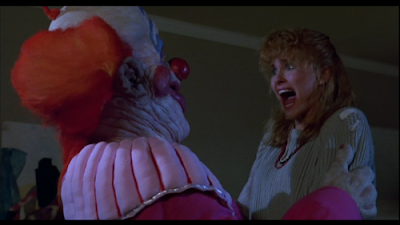 Whether obsessing over pop stars or actresses, having a female avatar has always been a milestone in gay adolescence.  I'm glad that Suzanne was my Gaga. 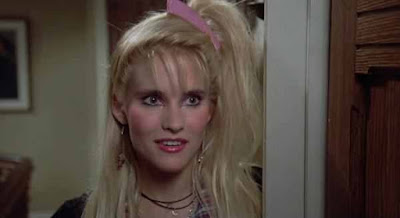 PS: she still looks spectacular and works as a life coach/yoga instructor.  Forget sending Nikki Blonksy cameos - this fall, have Suzanne fix your entire life.  She certainly fixed mine.
Posted by jeffreygmm at 12:19 PM

Labels: final girl, suzanne snyder, we can be heroes