"If you take it seriously you just get depressed all the time." 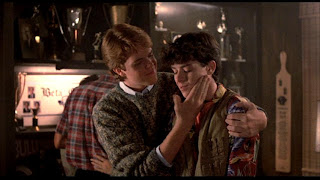 Maybe I’m showing my age, but I don’t think it’s all that bad for us city queers nowadays.  Don’t get me wrong, forty years have passed since Stonewall riots and we still don't have equal taxation for representation - but we aren't dying off like flies either. This is progress?
Sure, we may not be able to make-out aggressively against a jukebox in a Montana gay bar like trashy straights, but we’re prominently featured in primetime television shows starring Sally Field. We are a minority, but we can be a vocal minority.  We’ve moved away from "gay neighborhoods" and "gay bars" and towards becoming fully integrated members of society. Ellen doesn’t even have to dance like a monkey every morning to get ratings. Progress.
With forward momentum, there’s inevitably a hiccup in the matrix - our acceptance is conditional.  In the five years since Will & Grace (inoffensive and sexless, but nonetheless iconic and funny), I see the media bending over backwards to paint the homosexuals as being "just like you." Gay men are not, in fact, a threat to “decency” unless that means shopping at JCrew and buying unethically sourced furniture from Pottery Barn. 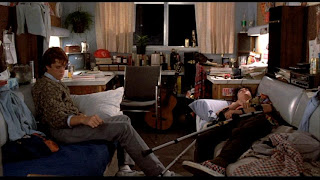 My favorite current in this media sea change is the emergence of the straight best friend. Not since the days of Jews and African Americans bonding together against a common foe has a camaraderie so warmed my cold heart.
Unlike gay on gay best friend dynamics, which can be messy and turn on a dime, there's no drama to be had here. There's no competition. It's just bros being bros - idiots free of subtext. Whether watching Jurassic Park with a thirty-pack of miller high life or approaching strangers at a bar, there's no better wingman than a woke straight guy. This brotherhood runs deep. Take, for example, Fred Dekker's genre-bending classic, Night of the Creeps (1986). 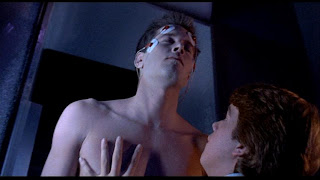 If you look past the ax-wielding zombies, the exploding heads, the creepy crawlies, and the overall collegiate tomfoolery, Night of the Creeps is about the bromance between a crippled gay kid named J.C. and the second Rusty from the National Lampoon Vacation movies (wearing lots of makeup for some reason). 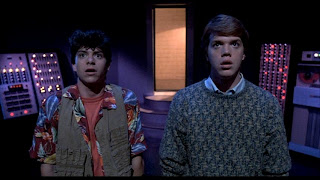 J.C. is the perfect friend. He's clever, funny, and a snappy dresser to boot! We never doubt that he has Rusty's best interest at heart, even to his own detriment. He is the kind of gay who's perfectly content in getting forcefully penetrated by space-leeches in a public bathroom if it means that his best bro gets to have a night with the girl of his dreams. That's love. 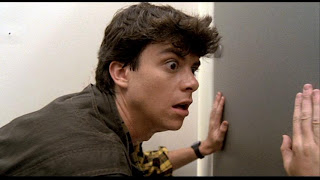 What makes Night of the Creeps so absolutely transcendent is its handling of this relationship between Rusty and J.C.. Never played for laughs, never playing for "gay panic," this movie is unafraid to explore platonic love between besties with complete sincerity. The performance of Steve Marshall as J.C. transcends genre and should be commended for giving this quirky b-movie a heart and soul. 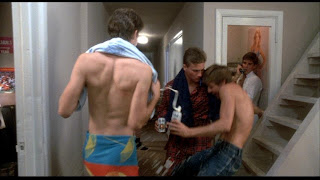 Of course, this was the eighties and that meant that the gay had to die so that the straights could live happily ever after. Hopefully, forty years from now, we can have our own happy gay endings. One day we will be the ones carrying the flamethrowers and getting the guy in the end.
Until then, there's Night of the Creeps. 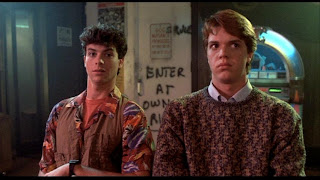 Please note: Allan Kayser doused himself in buckets of peroxide to play the film's antagonist. If you aren't familiar with Allan's semen-al work as "Bubba" in Mama's Family, learn history! 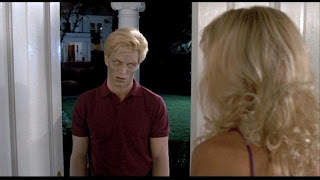 Posted by jeffreygmm at 5:13 PM