i only make passes at guys who wear glasses 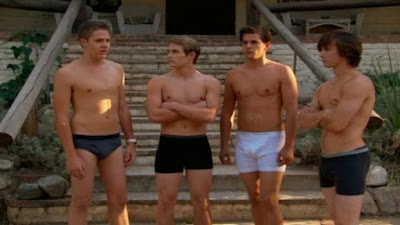 Once upon a time, I talked about prolific queer filmmaker David DeCoteau and his particular brand of direct to DVD horror movies in the aughts.  David appears to be a sweet man in real life and one can't help but respect how specific his work is (i.e. hundreds of films that feature shirtless straight boys right off the bus from Iowa willing to do anything on camera for their big break even if that means doing crunches while delivering wooden line readings to fifty-something character actresses in the same post-modern valley house film after film).

When I wrote about Decoteau before, I had never seen his best film.  I thought I was so cool by not paying him the respect he deserves.  I was stupid.

Thanks to Shudder and Joe Bob Briggs, that's all changed.  I will now and forever bow down before David Decoteau because I finally saw Sorority Babes in the Slimeball Bowl-o-Rama!

"You gonna suck 'em all up by yourself?"

Before today, I only knew Sorority Babes as the movie that Andras Jones was in before he was in A Nightmare on Elm Street Part 4.  I'm happy to be enlightened.  It's much more.

This is a movie about hot guys who dress like nerds.  That is my favorite trope in media.  There was a boy on NBC's Passions who was a 6'3" twin and a runway model with 4% body fat, but they'd wet his hair and make him wear glasses and we were supposed to believe he was a mega-nerd.  Nothing in the world is hotter.  This is a whole movie of that.  It's a queer director making a film in the exploitation medium, so it's a rorschach experience - the audience dictates what they want it to be. For the average straight guy, it's got tons of boobies and gratuitous sex, so it was prominently featured in the late night cable roster, but it's very much shot from the queer lens.  The camera lingers on the male form at every opportunity and, when coupled with its overall heightened tone, that makes this film a gay horror classic.

The S&M fixation of Decoteau's later works is already firmly in place here - this movie's super porny.  I actually wouldn't have been able to handle it in my pre-teen years - it would have given me a sexual heart attack.  There's a good seven minutes of paddle spanking. 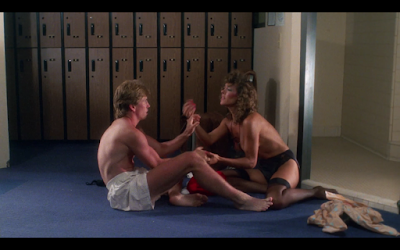 I remember there was this kid named Bard in my high school who had elderly parents who were always going away for some reason.  Junior year, he started feeling pretty cute because he did a school play and lost his baby fat and he would have these pervy parties at his house where kids would pretend to get beer drunk as an excuse to hook up with each other.  This was NOT my scene.  I remember crashing once and being mortified by how gross straight people were and I never really talked to any of those people again.  I mean, there were wolf paintings and mounted swords on the wall.  I should have called the police. 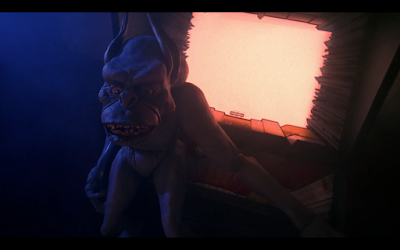 This story is relevant because Sorority Babes in the Slimeball Bowl-o-Rama is about a sex party gone wrong.  From what I can ascertain from what I saw of this film while occasionally looking up from my Taco Bell, it's a movie about teenage boys who get caught watching a lesbian sorority hazing and have to go on a treasure hunt in an after-hours bowling alley haunted by a little muppet demon who grants wishes.   Legendary Scream Queen Linnea Quigley plays Jerri Blank from Strangers with Candy: the early years and she makes gay besties with Andras Jones and they have a real lesbian/gay boy dynamic that assures me they'll be friends through many breakups and hairstyles to come.  Also, she steals things from corporations, which I respect. 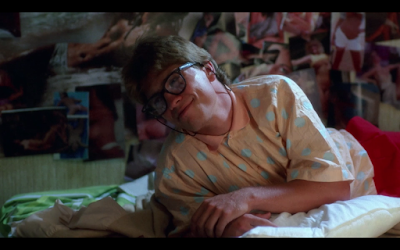 I love this movie.  It captures that very specific and elusive mid-late 1980s Southern California vibe that I'm obsessed with (as seen in Teen Wolf, Once Bitten, Saved by the Bell, etc).  There should be Sorority Babes in the Slimeball Bowl-o-Rama coloring books, promotional Pepsi tie-ins, a Universal Horror Nights maze and a Starz limited series based on the making of the film immediately.

Posted by jeffreygmm at 4:29 PM