...a monster what takes his time.

"Everyone has to earn a living."

In honor of NASA discovering a man-made life form (unquestionably harkening the eminent destruction of us all), I am pleased to announce the second best film nomination in this year's FaggotyAssAwards:
Monsters!
(I added the exclamation - people don't actually shout in Monsters.) 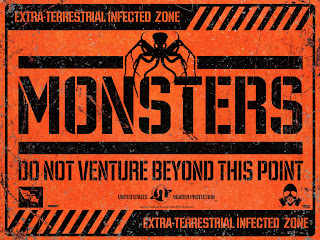 Set a couple of years in the future (well after the NASA lake monsters have fully developed and decimated most of our population), this movie chronicles a hispter photographer and a hipster trust fund girl as they become trapped in a Mexican war zone with no passports.  White people problems.  Its working title was "America hates Mexicans"...but that's better left for Arianna and her crackerjack team at Huffington Post to cover.

Loathsome hipsters aside, this is surely my favorite of the Jurassic Park sequels; at it's best, Monsters patiently explores intimate nuances of human interactions in the face of atrocity.  This is the rare horror movie that chooses to linger on human interactions and well-shot locations over cheap effects and jump-scares.  Get into it.
Posted by jeffreygmm at 10:08 AM