In honor of “National Coming Out Day,” I’m coming out in favor of Wes Craven’s My Soul to Take. Get into it.  This movie took an unjustifiable beating by critics and America proved once and for all that people have no interest in original stories or tone.  You see, My Soul to Take has more ideas than it even knows what to do with.  I guess that's a problem?

My Soul to Take is about becoming a man. It’s also about leaving behind the resentment of an imperfect childhood and apathetic parents and taking responsibility for yourself and your destiny. 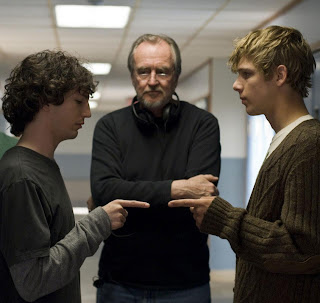 "That puppet was scary."

The process of becoming a man is a metamorphosis and often a painful one, at that.  Growing up is shedding the cocoons of insecurity and self-consciousness in order to fully inhabit the person you are.   Getting older is a daily lesson in learning to accept things that should never have to be tolerated (like Meg Whitman’s face), taking punches like an MMA fighter and still somehow finding the strength within to say, “Thank you that felt great.”   If everything works out, eventually you can wind up being the absolute best version of yourself in spite of parents who never really loved you, a town who wished you would go away, and a best friend who would rather stab you in the groin than kiss you on the mouth.  No wonder gay men are so mean!
This movie is exactly what I had hoped it would be - it’s a horror movie from 1987 made in today's meme (there are some of the best shots in Craven's entire career in My Soul to Take).  If you can see past a couple of wooden line-readings and an exposition-heavy screenplay that often feels as though it was translated from another language, My Soul to Take is the condensed soup of Wes Craven’s entire career.  All of his obsessions are on display: boiler rooms, big knives, voodoo magic, homicidal homosexuals in love, soul transplantation, gorgeous craftsman homes, and even California condors.  This is especially welcome because, unlike other current horror movies, Craven has a knack for finding teenagers who actually look like teenagers, who act like real teenagers and who have soulful eyes. 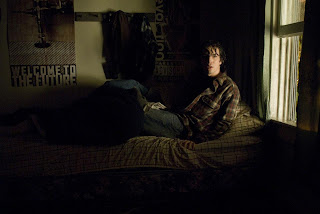 If we've learned anything in our continued exploration of horror movie magic, it's that when a horror movie has a male protagonist, it is a gay movie.  Knives penetrating boys is gay.  Lingering shots of shirtless boys emoting with pouty lips in steamy showers is queer.


That said, about halfway through My Soul to Take, I began to question my thesis.  Maybe straight boys can be sensitive and sweet?  Maybe straight boys, post-millennium, are allowed to be emotional and secure enough to have sleepovers with their best bros (who just so may happen to sneak in through their bedroom windows at night so their single mothers won't see)... and then the third-act set in.  My Soul to Take is assuredly and irrevocably one of the gayest horror movies ever made.  Thank God!

People can say a lot of things, but no one can say this movie isn't interesting.  It's logic may stray all the way around the river-bend with Pocahontas and her little raccoon friend and, sure, it appears that the studio hacked off about thirty minutes in the 3D conversion process and, yes, the central conceit upon which the entire film hangs is far-fetched at best - but this movie is FUN.  Fun, Momma, fun! Does anyone remember when horror movies were joyful? Does anyone remember a horror movie that used actual tension and story in place of jump scares? Does anyone remember when a movies' kills were shocking and not nihilistic torture-porn.  Shouldn't you actually care about the people being hacked into and not want them to die? Isn't that the point? 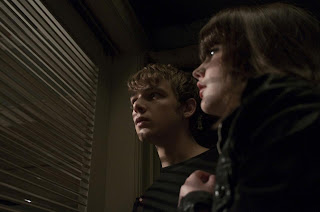 Perhaps My Soul to Take was too ambitious for it’s own good, but I refuse to consider that a flaw.  Like my fraternity brothers say on pledge night, "Go big or go home!"  I had the time of my life in the empty Graumann's Chinese Theatre.  Man up and go see it.  Put on your best over-sized 1995 cardigan, spray yourself down with some CKOne and bring your friends.
Posted by jeffreygmm at 10:13 AM