So, while Don was still off in California existing in perpetual flashback, Peggy was empowered by her new haircut (from a European Homosexual, no less) and finally got her own office while Joan was raped by her fiancé on the floor… no, wait.  That was my hetero-normative Betty Draper program. 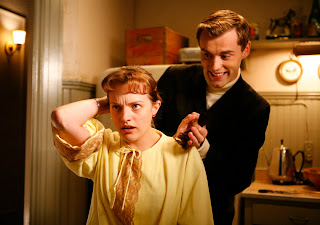 On Under the Dome, America's most riveting show about a bunch of actors who have never spoken to one another off-camera attempting to play scenes together someplace in Canada, the Gregg Araki kids were having a 90s themed skate party.  I know I swore off this program, but this week was written by a Jew.  THEY PULL ME BACK IN! 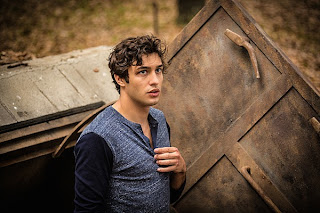 Oh look, it's already commercial time!  Can someone please explain to me the proliferation of Mary Louise Parker?  I just don't get it.  Don't get me wrong, Angels in America is everything - but Mary Louise 2.0 is off.  She seems resentful and on the verge of snapping.  I imagine she makes a lot of crew people cry.  I don't like it.

"I figured you could use some protein."

The Hot Guy Who Locked Shelly the Waitress in the Bomb Shelter is wearing his hoodie in the kitchen, indicating mania.  His father is the Old Guy in the Pleather Member's Only Jacket and, yeah, he's still wearing the jacket, its zipper near buckling from the girth of his beer gut.  Choices.  But, seriously, why aren't people changing their clothes?  Is this like 24?  Is everything that's not happening not happening in real time?  This must be one of the secrets that Ginger Dursley speaks of in her opening "previously on" monologue.  There's a whole lot of cop talk this episode.  The Latina Who Can't Act and the Old Guy in the Pleather Member's Only Jacket are looking for a rogue cop someplace under the Dome.   Shouldn't be too hard to find him...

"My partner and I are a same sexed couple with a child."

HAHHAahhaahhaa.  This show!  What WON'T they tackle?  Samantha Mathis's better half gets shaded by the townsfolk eating in her diner and Ginger Dursley has her first scene with the Hot Guy Who Locked Shelly the Waitress in the Bomb Shelter. Oh God, this commercial with Blythe Danner starring in a fictional play and talking to us backstage about her osteoporosis is SO GOOD.  I love when commercials exist in an alternate reality!

Back on the show - the Goth Girl and the Epileptic Boy are eating breakfast burritos.  They're joined by a bunch of the Gregg Araki kids and all the girls have fucked up hair.  The kids call the power generator a "genny" - you know, like teenagers do.  It turns into a party.  If only this show would just shift focus to the kids taking over the town like Children of the Corn.  It's kind of amazing how little happens on a program that's comprised entirely of plot. The Hot Guy who Locked Shelly the Waitress in the Bomb Shelter has a very emotional exchange with the Dome and Ginger tries to make it about her.  The Latina Who Can't Act plays a scene with a pig which is clearly meant to be a Simpsons reference, but it only comes off as hackneyed and sets a tone that none of what we're watching matters - like it's all a joke.  That said, the pig was very convincing and natural.  Good thing I'm a member of the SAG Awards Nominations Committee! 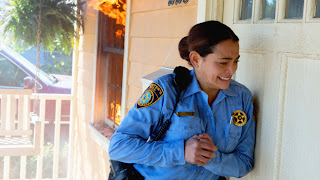 The Latina Who Can't Act was promoted to sheriff (whatever that means) and there was a commercial for the Sarah Michele Gellar/Robin Williams show which is actually unwatchable, as indicated by the fact that the entire commercial was comprised of behind-the-scenes interactions and slow-motion, thoughtful smiling.  This week we learned that lesbians are allowed to be on network television dramas but gays are only allowed on comedies.  We learned that Ginger stockpiled all the conditioner or hairbrushes under the Dome and hoarded the entire supply for herself while all the other girls are left with frizz.   The Goth Girl is also an epileptic and the Old Guy in the Pleather Member's Only Jacket still hasn't taken off his jacket. 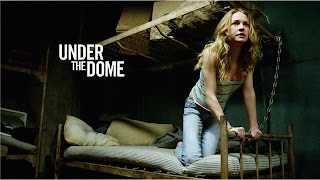 I'm starting to feel like Shelly the Waitress.  Stockholm Syndrome is setting in.
Posted by jeffreygmm at 8:56 AM