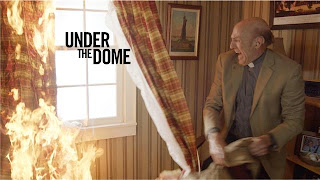 Good morning, dolls.  Another Wednesday is upon us and that means I shan't leave the house until I trudge through this Under the Dome program so you don’t have to.  Let’s see…we left off with Samantha having invited her trans neighbors up to her roof in the Meatpacking District for a Flirtini (that’s vodka with pineapple and champagne) Fourth of July BBQ and Carrie wore those shorts… No, wait, that was a good show. 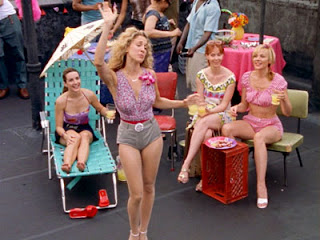 This week begins with Ginger Dursley, that girl who was fired from Twilight, espousing about three pages worth of exposition to make up for the fact that there was no character development in the pilot.  Previously on, indeed.

The Latina Deputy Who Can’t Act intuits that the Dome affects things with batteries because The Lawnmower Man had a battery in his heart and it exploded when he went near the Dome.  Then there are a couple of kids from a Gregg Araki movie talking about seizures and stars while Lenny Kravitz and my girlfriend are still working at the radio station – they’re both "costumed" in a bunch of junk that someone found in a Forever 21 dumpster in 2010.  Relevant.  Fresh. 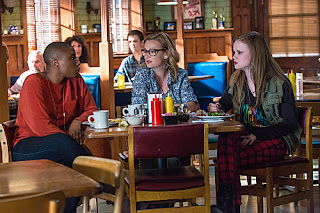 Samantha Mathis is wearing Ugg boots.  Oh, she’s a lesbian!  GAME CHANGER. There are military soldiers patrolling on the other side of the Dome so Ginger Dursley throws tennis balls at them.  Why not?

“He screwed my brains out and I loved it…”

Shelly the Waitress and the Only Hot Guy on the Show are playing scenes from House at the End of the Street.  Fresh.  Relevant.  They’ll work it out.  This man is actually gorgeous.  I’m sure he’s a NIGHTMARE to talk to at a party – just going on about how he’s getting a lot of attention from the show and how his real passion in life is hiking and the art of jujitsu.  Actors.

Meanwhile, the Gregg Araki kids are walking around holding skateboards and spray painting on the Dome.  Hip. Young. Fresh.  Mike Vogel pops by to check on their progress at the same time as Ginger miraculously appears at the radio station and the Latina Deputy Who Can’t Act finds the Old Man in the Member’s Only Pleather Jacket going through police files.  Plot Plot Plot

I'm getting back on my soapbox.  Plot without context or character is useless.  It’s not fun to watch and doesn't actually mean anything.  Respect your audience!

The lesbians have a Goth daughter (shocker).  The Gregg Araki teenagers see soldiers in lab coats spraying the dome with a hose and they realize the Dome is porous.   While, back at WKRP Under the Dome, Ginger has hijacked the radio station to let people know that the Dome is a Dome.  Whew.  I think we all know who’s getting that Pulitzer Prize this year! 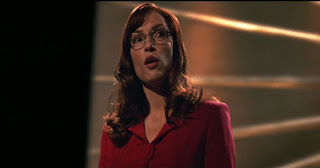 Oh, look - a commercial for Wolverine.  Hmmmm.  I’m not being catty to say that this movie looks an awful lot like Elektra, right?  What’s with the 2005 wigs and inner-city arts high school costume craft outfits?  Remember when Darren Aronofsky was going to make this?  Poor Famke.  There’s also a commercial with a man saying he’s lucky to have a woman who dyes her hair. 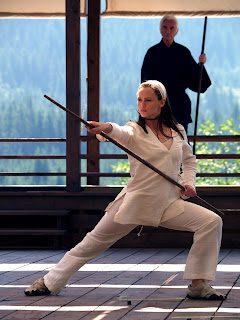 A crowd has gathered at the diner where the lesbians live. Then, in one of the most unintentionally hysterical scenes ever conceived, a bunch of extras hand Mike Vogel pans of water that he throws at a wall engulfed by computer-generated fire.  Somehow the teenagers and Ginger Dursley are there.  How did they get there?  How big is this town?  This brings us to the most interesting paradox of this program:  Geography.  We have no idea of the town’s layout – it feels as though everyone is on the set of The Carol Burnett Show.  One minute Mike Vogel and the Hot Guy are fighting in an empty cabin set and the next moment, they're rolling down a grassy hill by a river.  It's confusing.

Costumes.  Actors.  Is this meant to be The Truman Show?  Is that the twist?  They all know they’re on a TV show and M Night Shamalamadingdong is going to pop out at the end and give some homeless family a house?  If anyone knows, please tell me because this shit is exhausting!

The Lawnmower Man is already dead – as is Ginger’s husband.  And like three cops.  So...?  Killing off people who we have no attachment to means absolutely nothing.  I used to hate-fuck Smash until they killed off that gay boy and proceeded to act as though he was the reincarnation of the Christ Child (despite the fact that he had never been on the show or expressed anything beyond an extensive collection of Gilt cardigans and Justin Bieber's old haircut). I had to stop.

So this week, we discovered that everyone town is trapped under a Dome (...) and a house burned down.  The Old Man in the Pleather Member’s Only Jacket did not take off his member’s only jacket, Ginger Dursley's hair did not move and we learned that Samantha Mathis is in a biracial lesbian relationship who lives in a diner.  This would could be campy if it wasn't legitimately awful.

Camp is derived from a complete and reckless abandon towards a singular vision.  Showgirls is the absolute best version of Showgirls there could ever be.  Same goes for Mommie Dearest. Everyone involved was completely sure they were making something good.  Under the Dome isn’t campy because no one seems remotely committed or present.  There are no stakes – there’s no tension.  It’s over-lit and boring. 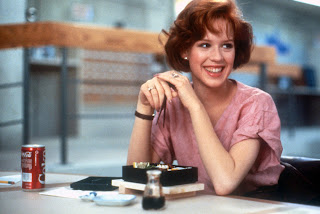 Bates Motel is majestic because it took characters and a premise we thought we knew and flipped our expectations - creating a new mythology and one of the most watchable shows on television.  American Horror Story continually presents a hundred different concepts and throws everything at the wall with an all-star cast, letting the good stuff stick.  This show does neither. I think we’re done here.  What do you think?  Should we continue or should we just re-watch The Stand?
Posted by jeffreygmm at 9:59 AM