Working on a project with clear limitations, be they restraints of budget or time, can often bring out the best in people.  However, in the case of the team behind, V/H/S and now V/H/S/2, these limitations only serve to reveal a deep seeded misogyny and overall aggression towards anyone who learned as toddlers to use their words.

Let me ask you a question… Does Samuel Jackson do anything in the Star Wars prequels or those Marvel movies?  Do you know who his character is or why he’s there or what he contributes to the whole?  No.  He’s doing “machismo.”  Like Whitney said to Diane Sawyer, let me get one thing straight right now: Machismo does not play.  Ever.  That is not a question. This attitude (that of playing an attitude) has crossed over from the sloppy fan-boy masturbation of late-career Quentin Tarantino to the basement-dwelling horror blogger set that suddenly decided to put down their Cool Ranch Dorito tacos and have taken to distributing their very own homemade horror franchise.
God help us.

Now I realize that as a lower-middle class white guy in his thirties working at a horror network, I am in no position to speak on the concept of straight white privilege.  However, I can no longer, in good conscience, remain silent on the subject of these V/H/S movies. With great power comes responsibility. 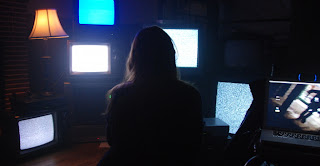 Picture it:  Sundance 2012.  Having loved House of the Devil, you can imagine the giddy anticipation that preceded the midnight screening of V/H/S last year.  Ti West was there – in a down jacket no less!  This excitement soon abated as the audience was assaulted with an aggressive and outwardly hostile film that hated women at every turn; and I’m not being sensitive.  I may watch every episode of Girls, but I don’t consider myself a feminist in any way - even the middle-aged distribution execs that were in attendance [those who weren't smart enough to walk out after fifteen minutes] commented on the films misogyny (and they NEVER notice that sort of thing).  Oh well - out of sight, out of mind.  Besides, the Radio Silence one wasn't bad...

But here we are, a year later.  Apparently my invitation to the Hatchet 3 premiere was lost in the mail, so I found myself home alone and curious with the V/H/S/2 screener beckoning.  No one was around.  Why not?  Well!  After this second foray into adolescent asshole-ism, I can officially say I’m done.  Killing a dog isn't rock and roll.  Close ups on people getting their faces blown off with guns in't cool.  Hating women isn't new wave.

Straight guys calling each other Faggot is tired and lazy and we  all deserve better.  I am too old to sleep on an air mattress and I no longer have to watch movies that don’t respect me (and us) as an audience. To me, horror has always been about the empowerment of women (and, to an extent, the gays).  These found footage movies are regressive and utterly pointless.  It is a dark time for the rebellion, but fret not.  Let us remember Ms Heather Langenkamp who learned in A Nightmare on Elm Street that the onerous is on us to take back the night.  Hacks have no power if we stop paying attention. We can do better.  I urge all of you to go get a SLR camera and make something – make the movie you want to see, create the world you want – the horror we deserve.

How easy is that?
Posted by jeffreygmm at 10:36 PM