"You know what they can do if they can't take a joke." 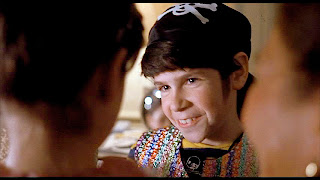 Imagine a movie audacious enough to open on a little girl drying out in the Helen Keller Clinic for the Emotionally Crippled.
Having been put away for dressing up like a clown while killing her stepmother, little Jamie is a mute and she's having some sort of epileptic fit, sweat pouring through her best dinosaur pajamas. The doctors need to perform an emergency tracheotomy to get her to breathe.
Just as the surgeon prepares to make the incision that will save her life, Donald Pleasence from Halloween cries out, “No!”  Yes, Dr. Loomis is in the Emergency Room for some reason – and yes, boys and ghouls, Halloween 5 (1989) is really this good! 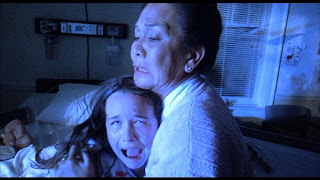 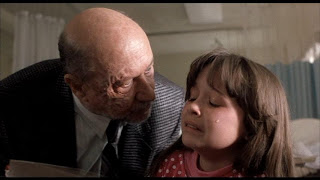 One would think that the proposed bastard daughter of Laurie Strode would be averse to Halloween, but not our little Jamie. She loves it. There are pumpkins in her hospital room, and God help the kid who thinks he has her beat at this year’s costume pageant! Jamie came to win. She even has a gay bestie to help her apply the perfect face before competition.


Jamie's life would be practically perfect if it weren't for that creepy Dr. Loomis screaming, shaking her, and constantly berating everyone about Michael Meyers! 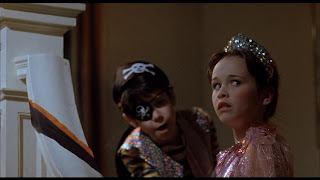 Meanwhile, in life outside the asylum, there's a girl who looks like Demi Moore and she's telling what may be the greatest fashion story ever assembled on film.  I'm talking about a zebra on denim jacket with pearls, acrylic hearts, and a purple taffeta collar. I'm talking bedazzled denim pantaloon-style daisy dukes and a black lace body stocking!  Looks. Besides turning looks, she's there for some reason and saying some things, but I can't concentrate on anything but her outfits, so who knows? I do know that Demi and a couple of her friends get super drunk, steal a box of kittens, and wind up alone in a barn with Michael Meyers.  I told you. This is a good movie. 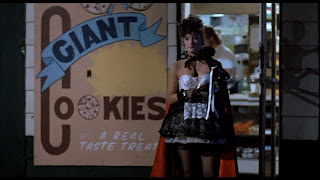 In a futile attempt to bring these two stories together, Jamie and her best gay break out of the nut house and set off to bring down Michael Meyers once and for all, turning Halloween 5 into the Bugsy Malone of slasher films.  The kids have their work cut out for them.  Gone are the days of plodding along atmospherically with a butcher knife, in Halloween 5 Michael Meyers drives a Camaro. 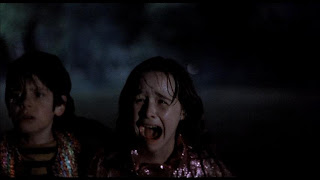 How good is Halloween 5?  When the going gets tough, moments after her closest family members are brutally massacred (again) at the hands of Michael Meyers, Jamie goes upstairs to brush her hair under police supervision. A girl after my own heart.
How good is this movie?  After driving himself to Jamie's house in a police car and killing all the attendant police officers, Michael Meyers stops to have a chat with Dr Loomis at the top of a gothic stairwell.  Without giving away the camptastic ending, I'm willing to wager money that Michael Meyers is played by Piper Laurie in this film - it's THAT good. 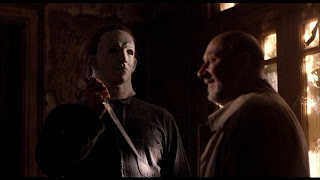 Call me crazy, but I love nothing more than seeing a child actor terrorized irrevocably for ninety minutes for our entertainment.  With the exception of Donald Pleasence (who sometimes falls asleep mid-dialogue - bless), the performances in this movie are over-the-top, alternating exclusively between hysterical sobbing and screaming hysterically.  Like Jamie's gay bestie, Halloween 5 is a much-maligned and misunderstood pair of ruby slippers.  Get those slippers out of the closet and let them shine for all the world to see - you won't be sorry that you did! 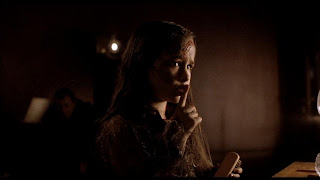 Posted by jeffreygmm at 7:18 PM