"I'm exactly where I want to be and I'm doing fine." 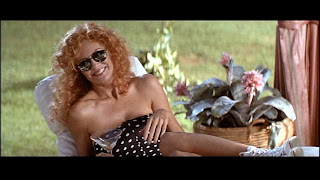 Oh my gosh, y'all.  What a day!
Tonight I was gathering my business from the back seat of my Honda Passport when out popped a pair of white briefs that I had been keeping there in case of an emergency.  Oops. Staring at those underpants lying there helplessly on the grey concrete, all I could think was, "Slut." Then I nearly doubled over - I was having a vision. My tidy whiteys with the turquoise waistband coupled with the sense memory of being called a slut reminded me of the most perfect Faggotyass summer movie - The Witches of Eastwick (1987)! 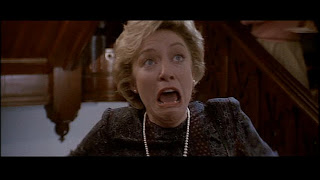 A full decade before the Sex and the City sluts permeated popular culture, we could readily categorize ourselves according to The Witches of Eastwick.  You were either an Alexandra (brassy and strong-willed), a Jane (prissy and demure, waiting to be unfurled like a summer rose),  or a Sukie (ethereal and perpetually frazzled by care-taking for other people). In gay speak: you were either Cher, Susan Sarandon, or Michelle Pfeiffer. 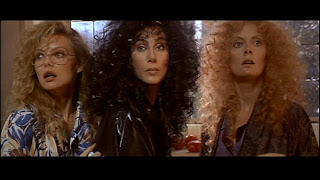 While these three actresses may have been at the apex of the 1980s Hollywood food chain, the ladies they're playing aren’t quite so glamorous.  They find themselves stuck in small town New England with an overwhelming feeling that life has all but passed them by. Recently divorced Jane is teaching music to unappreciative mongrels, losing her funding and constantly fending off advances from the fat and married board members of the elementary school.  Alexandra is an artist whose sculptures aren't selling; her husband died years ago, so she lives alone with her teenage daughter. Sukie loved a rocker but he left her high and dry to raise their six children by herself, working as a writer for the local paper.
But, watching this film as an adult, I couldn't help but wonder... 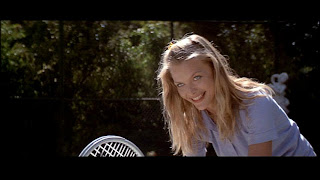 "Why is it always women who have visions?" 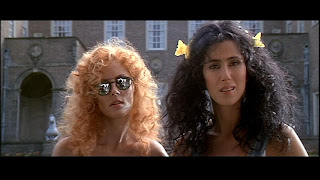 These are women who can influence the weather and who have persuasive powers over fruits and vegetables.  They can predict the future and make the earth move. They raise children and maintain mortgages. When their powers combine, they can vanquish enemies without even having to leave their martinis. Are these witches or just women?
If they possess all this power, then why is their primary concern that of finding a man? Is that a product of the time in which it was made?  Is The Witches of Eastwick a feminist parable or does it suggest that women are only content with a man who treats them like shit? I’ve seen this film dozens of times and still couldn’t tell you.
If you take away any struggle of good versus evil, are these women complex or are they sort of awful? The actresses present us with strong figures, but the movie tells us that they’re using Jack for his power and influence and for the sex.  Even when they've completely drained him of his life force, they still take his house and the servants. Men and the townspeople are only there to serve them.  Much like the Sex and the City girls, their actions have no consequences.  That's not an incredibly feminist perspective.
While Jack Nicholson initially appeals to their intelligence to get them in bed, in the end it's his chauvinism that keeps them there.  Why would three women who are smart and funny - with perfect bodies and great sundresses - ever desire a rotund, balding, narcissistic schlub like Jack Nicholson?  Is it internalized misogyny? Is this something lost in adaptation (adapted by men from a text written by a man)? 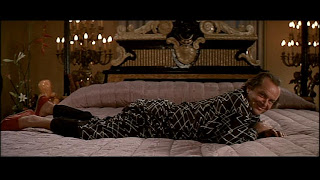 Maybe I'm just a messy queen who lives for drama, but I used to love this film.  But why? Why do a lot of gay men of a certain age hold onto this movie?

I think the answer lies somewhere in the delicate line between homophobia and misogyny.  Both gays and women have to work twice as hard for recognition in a society that is structured around the whims and desires of straight men.  That can take a toll.  Also, strong witches (like the gays) love themselves a pitcher of cocktails and a girls night out.  The gays (like the witches) are known for their permissive, if not European, approach towards sexuality.  Women and gays can both be found running board rooms, paying mortgages and supporting their parents, but still obsessing over finding the perfect man.  In the end, like the witches, friendships are our primary care relationships.  Consequently, gays (like powerful women) seldom seem able to carry on functional, long-term relationships because they see that it's a rigged system built to keep shackles on your own desires in favor of a capitalist notion.

Plus, The Witches of Eastwick is a Cher movie. 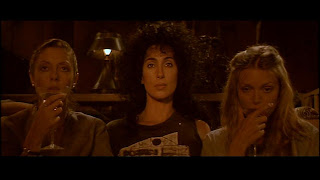 Despite a near perfect script from Michael Cristofer and an even better John Williams score, The Witches of Eastwick is a weird film.  Its behind the scenes stories are legend - the (male) producers pitted the girls against Susan Sarandon from the get-go and it definitely shows on screen.  I've heard Susan agreed to play Alexandra, only to show up to read through and find out that they'd given the part to Cher. I've head Susan spent weeks learning the piano only to show up on set to learn that they'd made her character a cellist.  Halfway through shooting, they made her a redhead. Whichever story is true, her Jane is particularly uneven - especially when paired alongside Cher and Michelle Pfeiffer's naturalistic performances. The film's third act ultimately succumbs to Hollywood bloat (having been re-shot three times) and causes confusion with regard to the films perspective.


Coherent feminist narrative aside, grab your best can of Aussie Mousse and pop this DVD in for a good time.  Whether you're gay or straight (George Miller directed it. He directed Mad Max.), you're sure to find this movie better than a bowl of fresh cherries on a hot summer day. 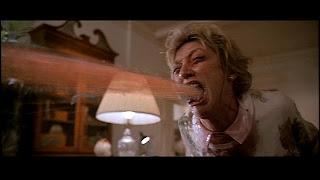