Do you want to party?

"The events portrayed in this film are all true.  The names are real names of real people and real organizations." 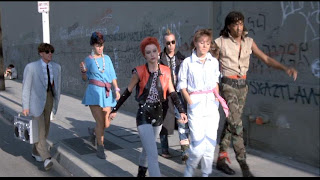 Last week, while I was pawing over Children of the Corn for stills of shirtless boys making gay face, something stuck in my head.  That boy with the smeared blood on his chest looked familiar and not in the way that all tall, pale, skinny brunettes are familiarly my favorite husbands to have - rather, I could swear that I knew him from someplace!  Oh well.

I filed it away as another transcendental memory from a past life. 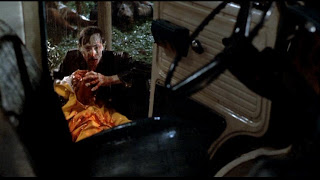 I dragged myself out to see The Crazies remake last week.  I had fun with the colors and the set pieces and my gallon of Coke Zero, but that's not what important - you see, today I was at my day job, staring at Taylor Lautner's head and Taylor was wearing way too much hair gel and something suddenly clicked... The Crazies was just a flat, humorless retelling of The Return of the Living Dead (1985)!  The Return of the Living Dead prominently features that shirtless boy from the cornfields.  Either the Matrix is broken or I'm not crazy. Either way, what better excuse to revisit a legit masterpiece! 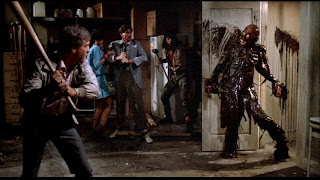 The Return of the Living Dead was among the first in a never-ending heap of films to explore what happens when the government, ubiquitous in its tinkering with biohazards in pursuit of chemical warfare, irresponsibly leaves a tank of mysterious goo behind in a small town to make flesh-eating zombies of the dead.
Picture it:  it's the 4th of July weekend.  It's the eighties, so everyone's hair has volume, and a group of fashion forward teens in Kentucky are looking to party.  They have a car but nowhere to go! Their bestie, Freddy, is off working his new day job at the Uneeda Medical Supply Company (which just so happens to house a tank of inadvertently abandoned government-grade zombie left over from the incidents of George Romero's Night of the Living Dead).  The teens go off to wait for Freddy in the nearby cemetery where they wax poetic on the nature of life and death as teenagers are wont to do. 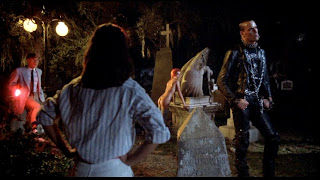 "Frankly, Burt, I think you acted precipitously in cutting up that corpse." 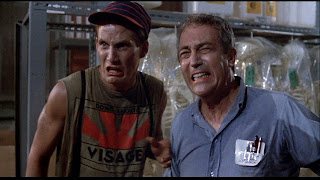 Freddy's new boss, Frank, is a hoot.  A real character. He can't wait to show Freddy the ropes of the medical supply business and his collection of top secret canister zombies.  While he may be a terrific boss, Frank is a bit clumsy in his enthusiasm. The next thing you know, the canisters are broken and our heroes are stuck dicing and incinerating military issued zombie parts in the neighboring crematorium.

If that weren't enough, the smoke from those government canisters has unleashed a noxious gas into the air that gets caught in the rain and seeps into the ground in the cemetery causing the dead to rise from their graves in the same graveyard where our heroes are having their all night rager. No big. 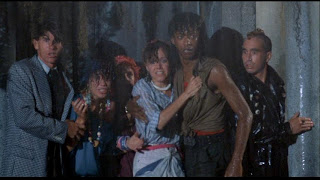 The Crazies has the same ending as Return of the Living Dead, but The Crazies doesn't have the '80s nor does it have scream queen Linnea Quigley doing a completely naked dance on a tombstone while her friends hold up flares and blare music from a boombox.

Dan O'Bannon was very smart and profoundly dissatisfied with convention.  He had worked with John Carpenter out of film school and considered everyone he came up with a sell out - as a result, he left nothing on the floor here.  This movie has the spark of someone who's pissed off about a lot of things.  The Return of the Living Dead is unabashedly a horror film while also managing to be a legitimately funny comedy and a full-blown musical with a new-wave/surf rock soundtrack that still bangs.  From its fashion to its nihilism, this movie is punk. 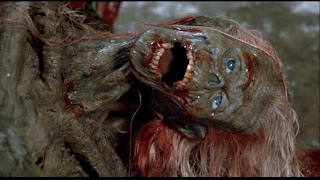 I first saw this film on late-night TV when I lived in Gloucester, MA.  We had one of those duplex condos with late-80s glass sliding doors that went out to the yard.  Entirely because of this film, I refused to go downstairs after dark because I didn't want to have to live out that moment where I saw a zombie walk across the backyard.  So watch this movie with the windows open because it's only right you should have that experience too.
Posted by jeffreygmm at 7:59 PM