close the door, turn out the lights... 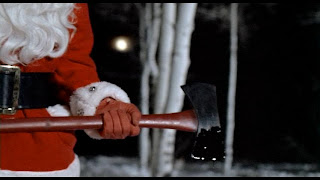 If you thought that little girl in Precious: Based on the novel "Push" by Sapphire was an experiment in endurance, then you obviously haven't seen Silent Night, Deadly Night (1984).  Poor Billy. 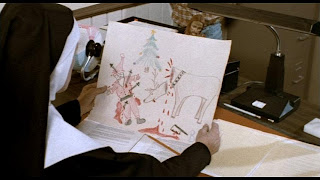 Billy was an angel from heaven with dewy, expressive Bambi eyes and preternaturally moistened red lips. Then, one Christmas Eve, his parents had the bright idea to take him to the Utah Mental Facility to visit his pedophilic monster of a grandfather.  Grampy gets off on terrifying little Billy year after year - this year planting seeds about how Santa Claus is a vengeful demon hellbent on the destruction of all that's naughty in the world. After Billy is thoroughly traumatized, his parents take him off for a late night drive in the woods where they are promptly attacked by a murderous convict in a Santa Claus suit.  Billy's dad is shot in the head, his mom's throat gets slashed in front of him, and his little brother, Lennie, is thrown off into the woods someplace to be raised by wolves (or Sarah Palin). 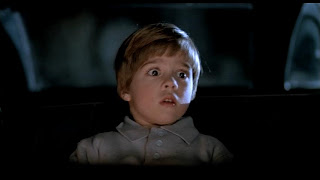 Billy soon found himself in the less capable hands of the wicked lesbian nuns at St. Mary's Home for Orphaned Children. He's a regular Christina Crawford, this Billy! After years of beatings from Mother Superior and a warped perception of heterosexual sexuality from having seen his mother assaulted  by a man in a Santa suit as a child, something rather curious happened to Billy: he got insanely HOT.


Billy realized that he was far too attractive for the company that he was keeping, so he renounces the Christianity that the nuns hold so dear.  Seeing their hypocrisies firsthand, he decides to bask in the warm, electric light of Mormonism. Mormons love repressed homosexuality and a deeply warped sense of right and wrong! He’ll  fit right in. 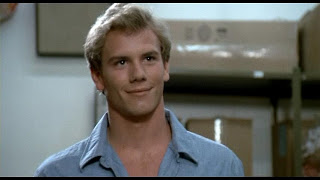 Mormons are hard workers.  They drink lots of milk so they can do heavy lifting and they have pretty blonde hair and skin.  Mormons have amazing bodies, but be careful - beneath those gleaming dead eyes and perfected fake smiles, they are not to be trusted!  Just go and ask the fine people who worked at Ira's Toys, where Billy got a job as a stock boy.  Oh, wait, you can't ask them anything because they're all dead!! All the years of repressed sexuality, rage, and wearing funny underwear finally set Billy off on a Christmas bloodbath the likes of which America has never seen. 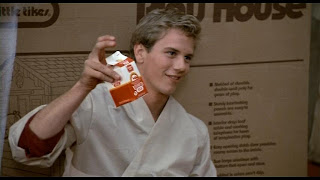 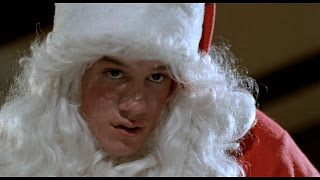 Silent Night, Deadly Night is amazing. I watch it every year.  Aside from the sheer animal magnetism of our protagonist (I'd let him hack me to pieces, okay?!), the director makes sure to spend a whole lot of time focusing on male ass shots, whether clothed in tight, high-waisted Lee jeans or just hairy and naked as God intended. Our first shot of adult Billy is a tight shot on his crotch.  If you know straight people or lesbians, there are at least 4 different sets of boobs on display as well. Something for everyone. I just love any movie that shows blood on snow and Linnea Quigley having sex on a pool table and a climactic showdown in an orphanage run by malevolent and immortal nuns. 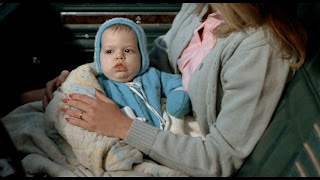 Posted by jeffreygmm at 1:59 PM