the biggest gift would be from me... 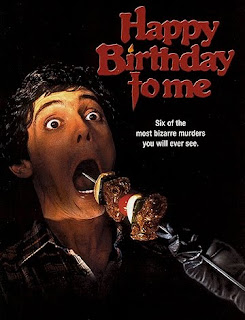 I will be the first one to tell you that I get weird about my birthday. I never want to make a big fuss so I don’t tell anyone about it, only to wind up morbidly depressed when nobody acknowledges my existence with cakes and pizzas and exotic chalets and skypes with Julie Taymor. This cycle repeats every year.
Adding to this neuroses, my birthday falls just a couple days shy of Christmas, making me a victim of “holiday” presents (which only seems unfair when considering I buy my friends both Christmas and birthday gifts, but who’s keeping track).  Add that to the fact that no one is ever in town because they all have families and... I'm sorry!  As you can see, birthdays can be a hotbed of anxiety and angst.


But you don’t have to take my word for it, just ask Melissa Sue Anderson! 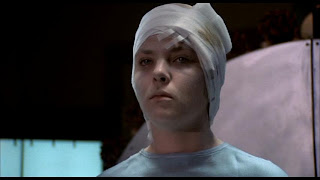 Things were going relatively well for Melissa Sue Anderson since her crippling and mysterious brain surgery four years ago. She was part of the most popular clique in school, she had cute boys interested in her and, on occasion, her hair wasn’t even that frizzy! But Melissa Sue is a complicated little nut to crack. You see, she’s a bit melancholy about the death of her mother; she can’t decide if she’s a lesbian or if she wants to bed her therapist (some 30 years her senior) - on top of all this, she has to plan her own birthday party. It’s all too much and it's all going to her head!


There's a lot to be learned from Melissa's birthday misadventures.  I, for one, won't let anybody feed me shish kebabs in front of a fireplace anymore because the chances are pretty good that they are a misandric, previously conjoined twin hellbent on revenge for some catty thing I did 20 years ago. 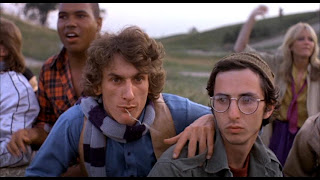 When I was in second grade there was a precious little monkey boy in my class. We all know the type.  He was the kind of gay boy who stood out like Chita Rivera at a Korean taco truck, he just could not blend.  Bless his heart. I hated him for being gay because, subconsciously, I was terrified that he’d start an elementary school witch hunt and the kids would be on my queer case soon thereafter.
One day, he was having a birthday party and he handed out these gorgeous homemade invitations.  They were perfect - covered in lace and glitter and feathers, folded to perfection. Well, in a daring display of homosexual contempt, I tore the invitation up in front of all the other kids in the class.  This prompted waves of laughter in the gay boys' direction seldom seen since Carrie got her period in the shower.


I’m not proud of my actions that day and karma came back to bite me in the ass years later, but that’s basically what happened to Melissa Sue Anderson.  Melissa threw a party and no one came but her alcoholic mother and she’s been waiting patiently for ten years to exact her revenge. 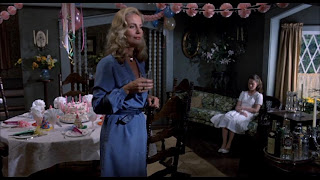 "I'm a rich woman now and I'm back to shove it in their faces!" 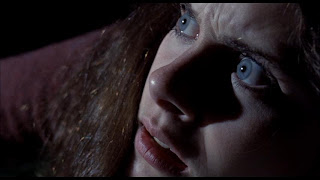 Happy Birthday to Me (1981) is St. Elmo’s Fire for the horror set. It follows the elitist “top ten” seniors of The Joan Crawford Academy as they plan for the future, drink to good health, and get brutally massacred in the campiest fashion imaginable. Who doesn’t wish St Elmo’s had ended with Emilo Estevez getting his face mashed off on a speeding moped tire by Andie McDowell ?!
This movie has it all: 1980s fashion, a genuine camaraderie between its characters, men in short shorts, female psychosis, emotionally and physically abusive mothers, race cars, and a third act that flies off the rails and into the stratosphere.
A lot of schlock came out during the horror craze of the early 1980s. While this movie may be ludicrous and campy, it’s capably made. The production design and photography are fantastic, as are the makeup effects and gore (albeit trimmed from its original cut to garner an R rating). Kevin Williamson owes someone a residual check for ripping off the Happy Birthday to Me dénouement in his Scream movie. The real joy comes from these actors having the time of their lives on camera and giving a lot more than what was on the page to every scene. Happy Birthday to Me is a delicious piece of cake with pretty pink icing and, when faced with an opportunity to have cake, always treat yourself! 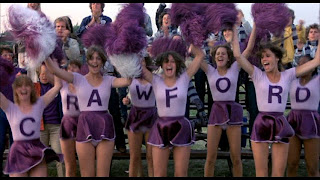 Posted by jeffreygmm at 5:23 PM

Labels: 1981, give me presents, good things, happy birthday to me