"That's enough with the biting." 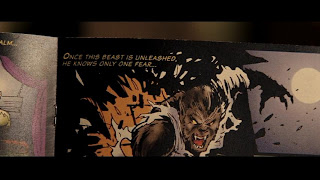 I’m gonna tell you a secret: sometimes I get a little hungry for a happy ending. Socially awkard girls with no marketable skills and borderline lesbian tendencies get to swoon over sparkley hipster vampires and LatinX werewolves. Women of a certain age have Nancy Meyers romantic dramedies with terrible overhead lighting and self-hating female leads. For me, escapism is imagining a world where gays can live happily ever after in functional relationships (if they so desire) with a craftsman homes and reasonable taxation for representation.
While it’s wicked awesome that Milk and Brokeback Mountain can make piles of money and get progressive soccer moms to feel like they’re reaching out to minorities – these movies still make a martyr of the fags.  We die so people feel “woke.”
But then I had to wonder: Can we ever have a happy ending? From time to time, when starved for any reflection of the contemporary gay experience, one begins to see gay subtext in the mainstream.
You don’t have to be Nancy Drew to see that the Neil Jordan/Jodie Foster movie, The Brave One, was clearly intended to be a lesbian revenge thriller - no one gets bashed for being heterosexual in Manhattan.   Popularized by Quentin Tarrantio and Kevin Smith, once you look at Top Gun through the gay kaleidoscope, it’s impossible to see it as anything but a story of two men coming to terms with their love for each other…no straight guy would sing karaoke to Kelly McGillis.
Wes Craven (always a friend to the gays) and Kevin Williamson (always gay) made a movie that no one saw called Cursed (2005). Cursed uses werewolf bloodlust as a metaphor for dormant sexuality with the 1990s popcorn horror paradigm as its model, only it was released in 2004.  Both pastiche and ahead of its time, Cursed may be the gayest entry in the Craven oeuvre and it comes SO close to presenting a gay happily-ever-after that it merits exploration. 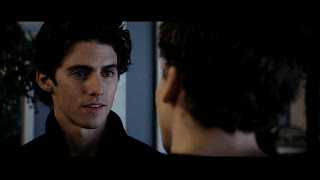 Jesse Eisenberg and Christina Ricci are siblings who are touched by The Wolf. Christina wears ill-fitting business suits and styles her hair in a bun to imply that their parents are dead.  Like Judy Greer and Portia DeRossi (who also ham it up in Cursed), Christina doesn’t exist without a gay audience.  Her performance counters realism. Always mindful of her deaf fans, she makes a lot of faces and indicates everything.  She is drawn to emotionally distant men (amen) and men are drawn to her. Pacey from Dawson’s Creek is her boyfriend and he has perpetual stubble on his face as to indicate that he is a werewolf.  Milo Ventimiglia is the captain of the high school wrestling team. He drives a camaro and he’s in love with Jesse Eisenberg.


Jesse and Milo pretend to compete for the attention of an anorexic girl to make her feel better about herself, it’s very sweet, but they really just want to wrestle with each other. When push comes to shove, Milo comes out to Jesse and, together, they fend off the werewolf hoards and still have time to go out on the town with Lance Bass and his obnoxious Florida friends. 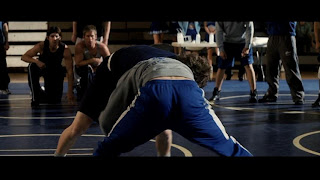 Let there be no question that when a movie has its climax in front of a Cher mannequin, it's a GAY MOVIE.  So why does Jesse never say, "Hey cool, Milo - I think my neurotic misanthropy is actually a smokescreen to cover-up my stifled homosexuality as well, let's make out!"?
Why must we read between the lines?  How can a movie be so queer as to have Judy Greer play an evil publicist who happens to be the Queen of the computer-generated Wolves in a Bob Mackie slit-to-the-crotch purple gown and not have the balls to just let its secondary lead live happily ever after with a hot (albeit physically and emotionally diminutive) boyfriend?  Considering that Hollywood still refuses to let women carry movies, I suppose it really isn't homophobia as much as it is misogyny and the bottom-line.  At this point in his career, post-Scream and Dawson's Creek, Williamson could have done better.  He could have pushed boundaries instead of uncle tom-ing his gays.  If you try to appeal to everyone (ie: the Weinsteins), you wind up making no money and your movie is exiled to the graveyard of castrated opportunities.  Lesson learned. 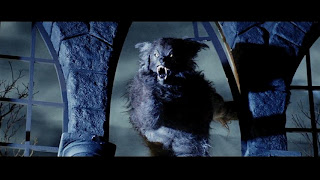 Posted by jeffreygmm at 2:16 PM