friends to the end

“You’re an abomination, an outrage against nature!” 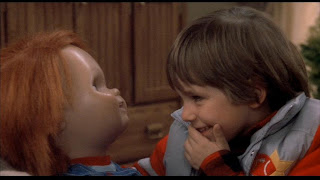 It must be hard for the single moms of gay boys. They have no sex life to speak of. They work multiple jobs to make ends meet and their kids won’t stop going on about the impending unicorn invasion or about how Joanne Worley is their cafeteria lady and how she won’t let him eat macaroni and cheese.  It’s exhausting.
Eventually, these moms have to start tuning their gay kids out. Some moms go so far as to send their little gay boys away, whether to private school or to one of those Jesus Camps in hopes that the gay might dissipate in time. Child’s Play (1988) validates these concerns. If you don’t send that little faggot packing, the next thing you know, your gay kid will be taking the L to Cabrini Green to blow up crack houses during show'n tell while you’re getting gang-banged by a crowd of vagrants  in a Reaganville. 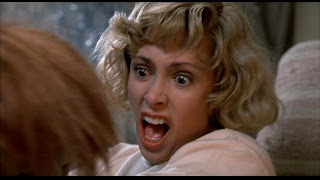 Catherine Hicks was a shopgirl.  All her son, Andy, wanted is a doll for his birthday. Conveniently enough, the wacky back alley peddler who lived in the alleyway behind her shop had a special on talking dolls and she was able to make her son’s dreams come true as only a doting single mom could!


Andy proceeded to act out his model for a perfect relationship with his new doll, Chucky. They shared clothes, watched Rachel Maddow together; cuddled until they fell fast asleep. It was bliss. Then people started to die and everyone blamed Andy. Andy gay-panicked, fearing that it may be his relationship with Chucky that was causing people all this pain. This led to Andy renouncing his former life with Chucky, going so far as burning his former companion alive in the fireplace! (They always want to set us on fire.)  By giving up his gay boyfriend, Andy's soul is clean. How rude. 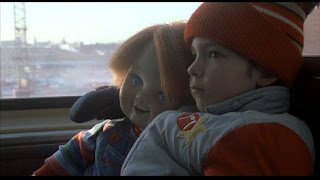 Despite the gayest of intentions by out and about screenwriter, Don Mancini, Child’s Play functions as allegory for heterosexual conversion. Maybe Todd Holland, after having to suffer so many queers on the Fright Night set, was just tired of being liberal minded. Maybe he was trying to fight against an inherently campy premise by playing up the voodoo and Chicago beat cop angle. Luckily, Andy’s performance out-camps even John Water’s gayest expectations. Andy is one to hue to shades of naturalism in his choices, but he’s just so damned adorable! It’s impossible not to love this little pumpkin with his staggered phrasing, baby voice, and lady scream.


Thank God for us, Andy's story was far from over. 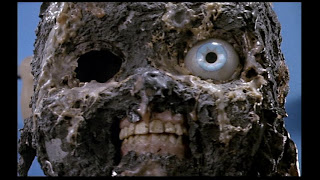 "Well, to come to terms with something he couldn't possibly understand, he turned it all into a kind of fairy tale." 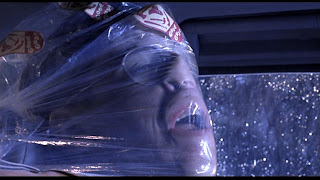 No matter how Right-Wing-Evangelical-Backward this country may seem, social services doesn't take well to mothers who make their toddlers burn gay dolls in the living room in the name of being saved - even if they’re white.  Accordingly, Catherine Hicks got carted away to the nuthouse and little Andy wound up in the hands of a foster family.
Jenny Agutter from American Werewolf in London runs a halfway house for reformed homosexuals (her husband included) and, judging by the b-line that he makes for her collection of antique ceramic figurines, the gay-away definitely didn't stick on Andy.  He isn't alone this time, Jenny’s also sheltering a spunky 26 year old Trans boy named Kyle. Being around all these queer people has Andy going back to his old habits and, within a couple of days, Andy is reunited with Chucky as if nothing terrible ever happened. 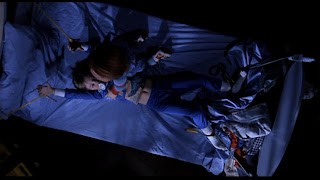 Like all abusive relationships, Andy can't quit Chucky, no matter how many dead adults lie in their wake.  Luckily, Kyle is there to save the day this time - teaching Andy that he can be whoever he wants to be without his toxic relationship.  God loves everyone just the same. If history taught us anything, it’s that the Trans community is always coming to save our asses despite how little we give them in return.  Thanks for your service, Kyle. 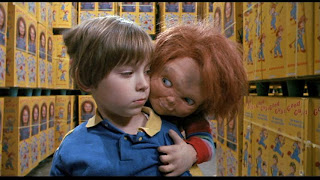 Child's Play 2 (1990) is much better than Child's Play.  It's tonier (aka: gay), more colorful (gay), the kills are more interesting, and it's able to be a much more concise in its satire of corporate marketing and blind consumerism (intellectualism = gay). I love the idea of two gay orphans going it alone like a prequel to Annie.
If there's one thing we learn from these Child's Play movies, adults fuck everything up.  Andy's nightmare was far from over. After two failed efforts, the Christian coalition couldn't get the gay out so they shipped him off the the military. 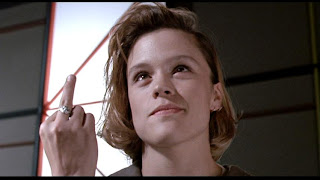 "Let's see what kind of tough guy you really are." Andy is sent to the Kent Military School where social deviants (gay kids, jewish kids, black kids) become conservative war-mongers despite their own interests.  After ten years trying, it looks like all that religious heterosexual conversion jibberjabber actually clicked for little Andy Barclay because in Child's Play 3 (1991), Andy's not gay.
You can't really fake being gay; it's a commitment (the skincare alone) - that's why straight actors always win Oscars for going gay in a movie.  Fear not, there's a new gay in town this time around, an autistic boy named Tyler. Tyler is equally enamored by Chucky and the homosexual cleansing responsibilities now fall on Andy's shoulders.  Ironic. 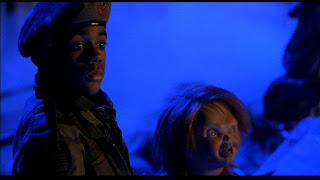 Now, I can buy a movie where a doll comes to life after being possessed by the spirit of a serial killer through a voodoo spell.  HOWEVER, when they go to great expository heights to set up the fact that Chucky can only transfer his soul into little Andy, then suddenly backtrack on that commandment, that's called sequelitis and Child's Play 3 suffers from that ailment.


A key ingredient is missing when Chucky goes from being a doll that people would want to buy in a store to the latter-years perpetually mangled angry face, hamming up catchphrase after catchphrase.  The horror and perversion came from the fact that this serial killer was in the guise of a cherubic children's toy. No one would look at the latter years Chucky and say "oh, how cute" and the movies lose something crucial. 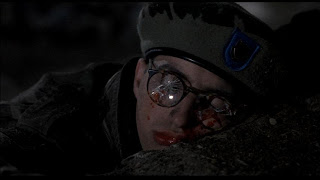 Despite the Child's Play movies discomfort with gay kids (which may just be a product of their time), we owe a lot to Don Mancini.  Having written the first film while he was still in college, Don opened the closet doors for gays in horror and created a franchise for Universal (it doesn't hurt that he's genetically attractive to boot).
The Child's Play franchise went in a much more fantastic and whimsical direction and even had openly gay characters during the Meg Tilly years (though the gays still have to die for their sins, of course).  I'm sure little Andy is happily married and on his fifth domestic beer someplace longing for the gay days of his youth, free of compromise and full of adventures! 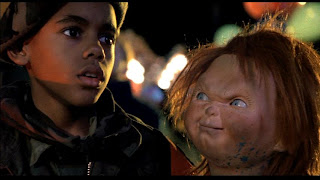 "Dolls are for girls." 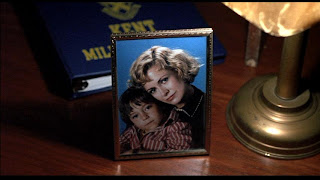 Posted by jeffreygmm at 8:00 PM