"Your friend needs a psychiatrist, not a vampire killer!" 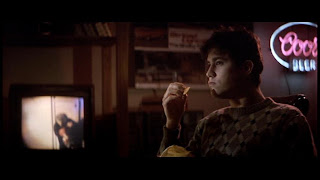 In high school, I had a guy best friend and a girl best friend. Clandestinely, I was deeply in love with my guy friend who, in turn, hooked up with my girl best friend.  She wound up being a lesbian a couple years later and neither of us talk to him anymore, so we all lived happily ever after.
This is the story of Fright Night. 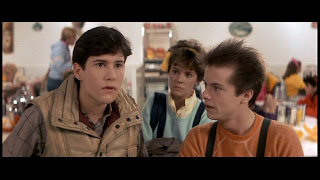 Fright Night is about three kids who are confused about what to do with their private parts until a couple of gays move in next door and set them right. It's like Mary Poppins or The Sound of Music only, instead of Julie Andrews, they’re set right by a gay vampire and the Queen of Old Hollywood herself, Roddy McDowall. 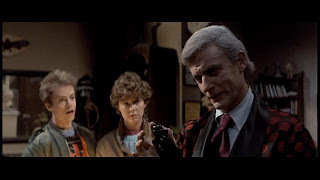 Charlie Brewster is the only child of a single-mom. She’s  always off working and he’s left to his own devices day after day. Usually this is confined to talking trash with his twitchy best friend, Ed, or making out with his best girl friend, Marcy D'Arcy, but all Charlie wants to do lately is snoop on the people next door.


Charlie finds it a bit odd that his new neighbor, Jerry Dandridge (along with his “live-in carpenter"),  insists on moving-in all of his priceless antiques in after dark…but you know how private the gays can be, especially in these smaller towns. Charlie’s minor curiosity soon turns into a full-blown obsession. He starts spending all his nights eating junk food alone in his room, staring at his neighbors through binoculars.


Maybe it’s the pressure of not passing trigonometry or being scared of having to go to second base with Marcy, but Charlie fixates until he has gays literally coming out of his closet! 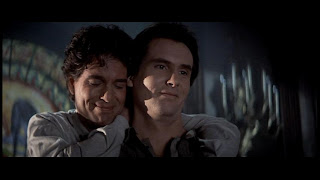 When my high school best guy friend started dating and kissing girls, my shit got dark. I didn't want to talk about it because then I’d have to come out of the closet and we might not have sleepovers anymore, so I would go running on the beach late at night.  Likewise, with no beaches at hand, "Evil"Ed goes walking alone down dark alleys at night while Charlie and Marcy are off not having sex.


Lonely and sad, Ed finds himself in the embrace of a vampire who extends his overly manicured hand and makes him full fledged gay vampire himself with the promise of never having to be an outsider again.  Good for him. 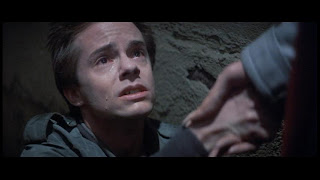 In a play for emerging Bisexual Rights, Jerry Dandridge sets his sights on Marcy D’Arcy next, appealing to her inner lesbian by staging the nightclub scene from Basic Instinct.   This straw breaks Charlie's back and sends him to the godfather of all homosexuals, Roddy McDowell, for advice and assistance.


Roddy Mcdowall as Peter Vincent: Vampire Killer is the heart and soul of Fright Night. Besides being about tangential characters coming to terms with their sexuality through the help of some cashmere-clad vampires, Fright Night is about the divide that existed between the classic Universal and Hammer years of old Hollywood horror movie glamour and the disposable slasher films of the 1980s.


Peter Vincent is feeling washed up and under appreciated. Kids today don’t care about how Robert Wagner and Christopher Walken killed Natalie Wood or how he coaxed Dame Elizabeth Taylor out of her great depression after Monty Clift’s accident outside her mansion. Only by helping Charlie get those pesky vampires out of town, does Peter Vincent/Roddy McDowall come to appreciate his status as the national treasure that he truly is.  I miss him. 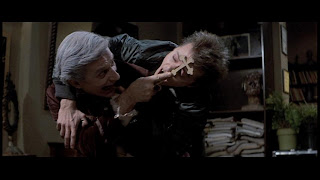 Representation matters and growing up gay and seeing (albeit coded) gay characters in a horror movie made me feel less alone.  Fright Night is a wonderful example of the care and attention that went into horror in the 1980s and not just because three of the five men in this film weep openly. After all the anguish men have caused us over the years, that’s always a win in my book.
Posted by jeffreygmm at 11:56 AM