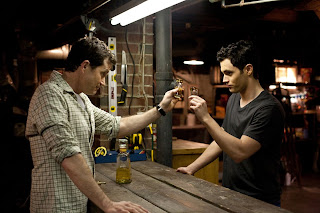 Hanukkah came early this year thanks to our good friends over at Screen Gems! Coming out this weekend, like a made for Lifetime movie directed by David DeCoteau: The Stepfather (2009)! 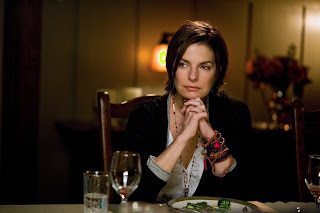 The original Stepfather (1987) was about the baby-boom generation learning to let go of their manufactured American Dream.  Terry O'Quinn played a man who couldn't seem to let go of his fantasy of a demure, loving wife with obedient children; he wanted to have a two-car garage, and all the trappings of consumerism.  When his dream wasn't capable of actualizing itself, Terry went on a killing spree from town to town like a divorcee Goldilocks, trying on different families until one finally fit (maybe the problem is you, Terry).  This meant something in the late 1980s as the country was crawling up from a period of great excess and soberly awakening to a fiscal recession, the age of grunge, and the dawn of the female CEO.  There was no longer such thing as a "traditional family" and  Terry had a right to be upset!  But today, in the post 9/11 recession, this character lacks any and all motivation - so they have him terrorizing the other boy from Gossip Girl, who is playing a swimmer so he can be shirtless the entire film.  Fair enough. 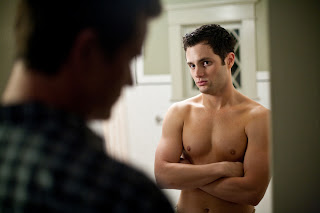 Sela Ward is a woman with three kids.   Sela Ward has no job or husband, but she has a five million dollar home.  How nice.  Sela Ward is lit like Morgan Fairchild and. more importantly, Sela Ward is pumped full of juvederm - so much juvederm that she actually looks substantially younger than her son in most scenes (the other guy from Gossip Girl).  Lucky for us, all the characters in The Stepfather (2009) speak in exposition!  Sela's eldest son has a checkered past.  We don't know why he had a checkered past and he never actually unleashes any kind of rage that would suggest he was once a hood rat (most thugged out kids don't sob in their bedroom over their lack of male role models while his headphones blast an emo-powerballad), but the exposition says he is a tough guy and I take their word.  Sela's son refuses to have sex with his insanely hot girlfriend because he is fixated on his mom's fiancee (the guy from Nip/Tuck and Congo).  He and his mom's fiancee share a bottle of Cabo Wabo in the basement; they exchange long glances, it's deep.  The other kid from Gossip Girl even takes his mom's fiancee's picture to bed with him at night.  Now, Sela Ward doesn't question any of this because she just needs a man.  Yes, sure it's really offensive to women and totally backwards and don't even get me started on Sela's lesbian sister, Aunt Jackie (I'm not being funny, her name is really Aunt Jackie). The real star of The Stepfather (2009) is Amber Heard as the other kid from Gossip Girl's thankless girlfriend.  I had never seen this girl before and she's EXTRAORDINARY.  She has the hottest body ever and she can actually act her ass off (and her tits and probably her vag', but they never let us see her and the other kid from Gossip Girl do anything but swim).  Why they didn't just remake The Stepfather with Amber Heard in the lead?  Why remake The Stepfather at all?  We will never know.  I do know that I want this Amber Heard girl at all my pool parties and I want to set her up with all of my guy friends and I kind of want to watch her touch herself.  Well played, Amber Heard. 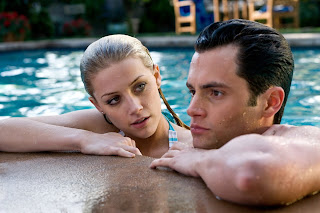 The third act of The Stepfather (2009) is the exact same as the third act from Beyonce's Obsessed.  That's a win!  The film ends on a freeze frame image.  Another win!  This movie is god-awful, but it is good laughs from start to finish.  It's like eating a bag of candy corn in one sitting - you know it's bad for you, but you can't stop yourself.  Most scenes play as though the cast is putting on a high school play version of the original Stepfather - there are even background actors striking set pieces mid-scene!  Go pay to see Where the Wild Things are and then sneak into The Stepfather afterward for free.
Posted by jeffreygmm at 1:12 AM