Did You Ever See A Dream Walking?

"Why can’t Jesse wake up like everybody else?”
“Oh, honey. He’ll be alright. He’s just having a bad dream” 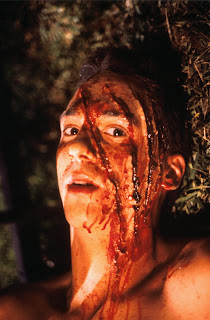 This is the only movie brave enough to ask  the question: what would happen if a gay boy moved into 1428 Elm Street and rented out the basement to Freddy Krueger? 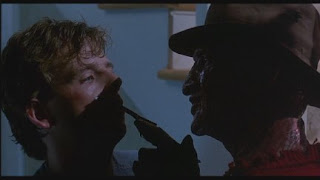 I have a favorite pink ski cap that I wear all the time. I found it in my closet and I’m not sure where it came from. I just love an accessory. Well, so does Jesse, the male protagonist in A Nightmare on Elm Street 2: Freddy’s Revenge – only, instead of a ski cap, Jesse found Freddy Kreuger’s murder glove in his basement and just can’t stop wearing it all over town!

What makes this film gay, you ask? Well, it certainly doesn’t shy away from the stereotypes.
Does the main character scream like a woman? Yes.
Does he, like me, present as pasty and effeminate with wrists that are often limp and a face that sometimes looks like he’s sucking on lemons? I mean, yes.
Is there a game called “Probe” in his closet? Yes.
Does he refuse to have sex with his girlfriend? Yes.
Does he complain about a man desperately trying to get inside him? Yes.


Does he perform a dance number while cleaning his bedroom to dance remix of “Touch me (all night long)” in glitter-festooned gold sunglasses while giving his tennis racket a hand dookie and bumping his tight, high-waisted-acid-washed-denim wearing ass into his dresser drawers?? Yes. Yes, he does. 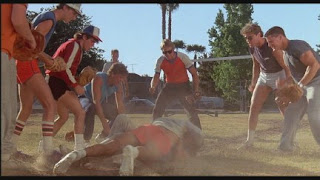 One could say that A Nightmare on Elm Street 2: Freddy’s Revenge is just a b-horror sequel that suffers from peculiar casting and some minor homoerotic undertones. Situations like Jesse and his best friend, Grady, pulling each other’s pants off in gym class where they happen to only be wearing jockstraps could be in good fun! Right?  And who hasn’t dreamt about being strangled in biology class by a giant python emanating from ones groin? Lots of boys have “no girls allowed” signs and Kate Bush posters plastered on their bedroom doors! Maybe Jesse’s inability to find his traditionally beautiful girlfriend sexually appealing stems from deep-rooted intimacy issues.  Maybe he just doesn’t love himself enough to accept love from anyone who isn’t trying to murder him and his best friends and family. Or maybe he’s just gay. You see, that’s the thing. Jesse is gay. 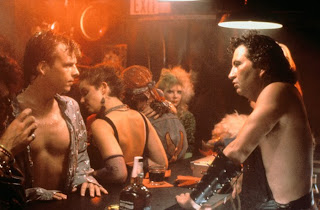 While pouring his underage beer into a juice glass, sweaty and half naked, Jesse is approached by his high school gym teacher - who just so happens to be in full leather S&M gear.  As one does when confronted with a student in a sex club, Jesse’s gym teacher takes him back to the high school to have gay sex.

While Jesse is languishing in the hot shower, his gym teacher is busy preparing some ropes to tie Jesse to the shower stalls.  This happens. Two men meet in a leather bar and go back to have consensual, tied up gay sex in a Nightmare on Elm Street movie and it took nearly thirty years for us to acknowledge that said film may or may not be “queer.”  And you wonder why we march in the streets every June! 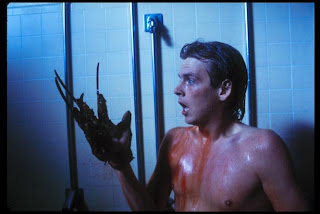 Of course, Freddy Krueger doesn’t go for such blatant breaches of the school board of conduct and Jesse’s a little anxious - he doesn’t know if he’s ready to be a full fledged gay-sex having homo, so the gym teacher is flayed.   Plot twist: when the smoke clears, we see it was Jesse and that silly glove doing the flaying. Rough trade!

Like most of us, Jesse’s first sexual experience was a traumatic one, so he continues repressing the gay boy within as only a teenager in the suburbs can. His gay panic body count rises as he runs off to his shirtless best friend’s bedroom, insisting that he be allowed to spend the night, only to be overtaken by sinister urges and, once again, killing the object of his desire. It’s worth noting that only men die in this movie. 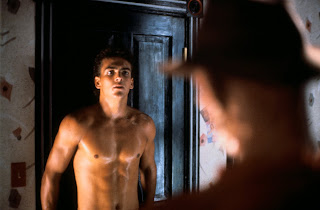 A Nightmare on Elm Street 2: Freddy’s Revenge exemplifies that a slasher film is primarily about penetration and the fear of penetration. When a man is the protagonist in a slasher movie, “the final girl” – so to speak, it is a gay movie. Men being penetrated is gay - or at least bi, but I digress.

Ultimately, this is a parable for conformity.  The pretty girl confesses her love and sets Jesse straight, so to speak. Freddy Krueger is excised.   But that’s a tidy end to a larger story. If there was A Nightmare on Elm Street 2: Part 2, I have no doubt that we’d find Jesse  happily gay ever after graduating high school and moving to Greenwich Village (or in this case, West Hollywood, because the tales of Mark Patton sightings are the stuff of legend – apparently he comes out of his cave as often as the groundhog sees its shadow, but I’m not one to gossip, so you didn’t hear that from me).


I love this movie a lot. I relate to Jesse, having had a pretty girlfriend in high school that I refused to have sex with, and he has an amazing swatch watch that I still covet. (In defense of Lisa, it’s hard to be the thankless girlfriend to a gay boy in high school. They won’t touch your vagina and they barely kiss you. They have SO much drama and rarely listen to anything that’s going on with you. Invariably they start going off at all hours of the night and showing up at your house with their hands covered in blood, sobbing about how “he’s inside me and he wants to take me again”).

A Nightmare on Elm Street 2: Freddy’s Revenge is the benchmark to which all queer horror film criticism is rooted.  There was a thirty year period in which no one acknowledged that this movie was gay, intentional or not. This is the crux of our issue and this is what we will all work together to remedy.  We won’t be ignored. Not anymore. 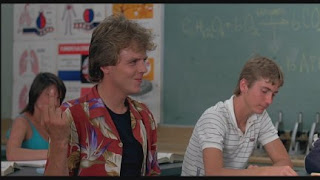 We're here, we're queer and we're all over your horror movies - get used to it.
Posted by jeffreygmm at 3:32 PM