I have a complicated relationship with The Shining.  It's no secret that I had a fucked up childhood.  We all did. Trauma is relative, I get that.  For me, personally, my trauma involved having a dad who repeatedly tried to kill me and my mom.  He was a Vietnam veteran, so I'm sure he had lots of trauma of his own.  I can't imagine. 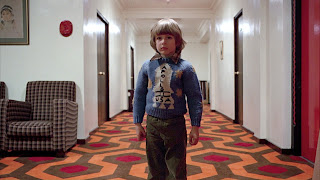 As a little boy, my trauma manifested in a stutter.  After my father broke down the door to our house and went around chasing mom with a butcher knife, I stuttered for a few months. Mom proceeded to file for divorce and take night classes, but then things escalated.  Violence at home became somewhat routine. There was the time he had all my Easter eggs lead up to his bedroom where there was a shotgun waiting for me as he calmly explained how he was going to use that gun to kill my mom.  Then there was the time he tried to run me and my nana off the highway and  I jumped in the space between the back and front seats until Nana drove us to the police station.  I probably got a Howard Johnson milkshake after that.  Worth it.

As a result of this violence, we moved a lot.  He'd always find us. Mom got restraining orders, but those don't really mean anything.  I slept with a bat next to my bed for about a year after he followed us into a screening of Ferris Bueller's Day Off and we had to be escorted home by the police.
At six years old, I didn't really get that this wasn't normal. 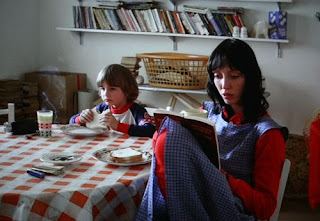 In the years that followed, I read lots of books.  I watched movies.  I lost myself in stories.  I never lingered on what happened with my dad because that was the past.  I had a mom and we had some laughs.  That was alright by me.  Why would I want a dad if he was going to be such an asshole all the time?  So, aside from a couple close calls where he threatened to show up - somehow knowing where we lived,  I never gave it much thought. I had no time to stew in my trauma. I had enough on my plate trying to get myself to New York before The Fantasticks closed! 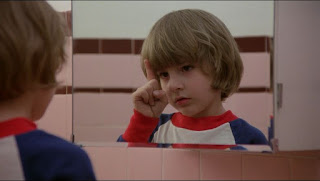 My love of horror movies was how I processed this stuff, safely detached from my own personal experience.

Watching a movie, you get scared and your imagination is triggered, but then you go home and eat pizza.  No muss, no fuss.  Horror movies were how I dealt with bullying in elementary and middle school, where I made friends with the people who ran the Gloucester movie theatre so they would let me see R-rated movies by myself.  Horror movies were there with me in high school when I finally came into myself socially and would invite my friends over to eat cheese and watch the latest VHS trash I procured from Videosmith.  And horror movies were certainly there with me in undergrad, where it became routine for me to watch a scary movie to fall asleep at night.

But there were hiccups along the way.  There was a period in undergrad when I watched The Shining - a lot.  Like, every day.  I didn't question why.  I just liked it.  It wasn't until my roommate said "you watch this movie every night because your dad tried to kill you" that it clicked.  Oh!
I stopped watching The Shining and got a therapist.

That was twenty years ago.  In that time, I've continued to watch scary movies and I've continued to pay no mind to the brief moment in time where my real life mirrored that of a Stephen King story.  I'm forty now.  My father is dead.  He drank himself to death and was eaten by dogs (again, it is not my intention to have my life mirror a King story, if I could be the hero of a story, it would involve a summer camp and an older counselor in impossibly short shorts who wants to help teach me how to swim).  Mom died too.  Now my ghosts are all ghosts.

Maybe that's why I was so gut-punched by Doctor Sleep.

From the shaggy hair, to the big-wheel and the Mom who's barely holding on, it's hard not to see myself in little Danny Torrance.  I was him.  So much of being a grown up is stifling that little kid you once were, assuring yourself that "it's not a big deal" when you're legitimately scared or sad - leaving the past behind to be in the present.  That doesn't always work and it's not always healthy.

This is probably why I lost my mind seeing Doctor Sleep.  I cried, I laughed, I punched at the air like a crazy person.  It's a really special movie and it reminded me why horror matters.   Horror is how we can deal with the real anguish we all face every day.  You don't have to live through a haunted house or campground massacre to be a survivor.  Whether you're queer or bullied or just had a really bad breakfast burrito, we're all survivors. 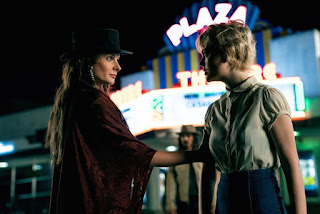 I liked Mike Flanagan's Haunting of Hill House because it was the first populist entertainment to really address that ghosts are the monsters that we carry with us inside - they're the past traumas that won't go away until we confront them.  Our experiences are the real horror.  Hill House was a genre parable about wellness - the importance taking care of yourself and the people you love.

This Flanagan world-view is very much carried over into his adaptation of Doctor Sleep.  People take care of each other in this movie.  Much like The Stand, this movie posits, without passing judgement or moralizing, that humanity can be good.  The power of kindness in the face of unspeakable horror.  Can you imagine?

Awful things will always happen, they happen to us all but we still have to wake up in the morning.  Just because we each go through hell getting here, it doesn't mean we have to be miserable to people or carry that baggage as a burden.  We can move past it.  We don't have to repeat the past. 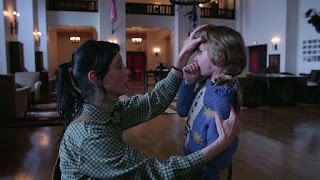 Who needs a therapist when I can process all this in the comfort of my local AMC?  Thirty plus years after sleeping with a bat, I no longer have all my curtains pulled shut.  I don't double lock the doors and windows every night and I have the luxury or revisiting my trauma in the safety of a movie theatre, stuffed with red vines and a can of beer that I snuck in.
Posted by jeffrey at 10:55 AM