When I was in high school, there was a Halloween theme park in Massachusetts called Spooky World that I was obsessed with.  The man on the radio said we could collect soda cans from the supermarket and get a discount ticket - how amazing!  If this wasn't peak 90s, nothing was. 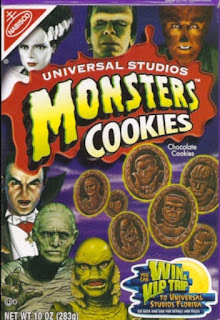 I have a lot to complain about, but my childhood was never lacking in Halloween festivities.  I remember going to Salem in my best Alf costume - screaming bloody murder three feet from the entrance to a spook house because someone invaded my personal space - having to be escorted out before the tour even began.

I remember the House of Seven Gables and the Witch Museum with its spooky red floor and downstairs dungeon and I remember Laurie Cabot's shop with its crystals for success and protection.  I remember the crisp fall air and the cobblestones and the CVS aisles of Halloween goodies.  But there was Spooky World - somehow untenable.

I remember, specifically, the afternoon in 1995 when school was out for some reason.  A special occasion if there ever was one!  I was wearing my R.E.M. Automatic for the People shirt and I had made the trek to my best friend Vanessa's house on my yellow huffy bicycle.  There was a crisp fall chill in the air.  I was basically one of those kids from Stranger Things.  After hours of trying every tactic I knew - from whining to scrambling to find newspaper coupons, Vanessa's mother FINALLY agreed to take us to Spooky World.  My dreams were real.  Anything was possible.  The world was beautiful and full of potential!  I raced to call my mom at work to tell her I'd be coming home late, but it was already too late.  Faced with the reality of Spooky World, Vanessa changed her mind.  She was "too scared."


So I never went to Spooky World and now, along with my hairline and collagen, it's gone forever.   It was shut down by the board of health in 1998.   Maybe it's for the best - I probably would have been gay bashed.  Or I could have met my bashert there, stumbling among the forest, splashed with fake blood. Who knows?  I never will. 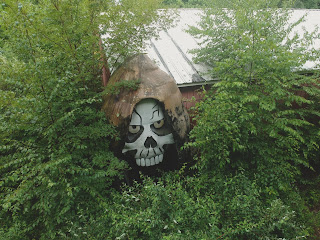 If there's a point to any of this, it's that y'all should go and do stuff!  The stuff won't be there forever and then you'll be sad you didn't do it and you'll have to relive moments you didn't have via 24 year old youtube videos uploaded by Kane Hodder from the Friday the 13th movies.
Posted by jeffreygmm at 1:35 PM