"They look just like you and I, but inside - inside they're...different."

In the early 90s, nothing was better than hunkering down for Friday nights with Rhonda Shear (and sometimes Saturdays with Gilbert Gottfried).  Heaven is a double feature comprised of Can't Buy Me Love and The Howling: Part 4.  I remember the palpable thrill that can only be derived from being twelve years old and desperately trying to stay awake throughout both USA Up All Night movies.  Coming out of the MTV years, I think we all took for granted that TV wouldn't always be rock'n roll. 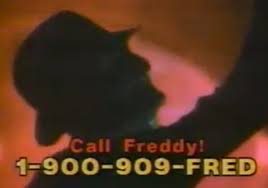 As long as there's been television, there's been cheap and easy late-night horror programming - the two go together like Kristin Chenoweth and twitter.  Whether staying Up All Night with Rhonda or hiking across town to the local video store and being lured by the siren song of a VHS box cover, one of the best elements of Pre-Blockbuster video culture was the element of discovery.

I miss being able to put my faith in late-night horror hosts and video store hipsters - the intimacy and trust implicit in that experience. Ticking through Netflix isn't the same.  Times have changed.  Even when Elvira came back to syndication a couple years ago, something was off.  Elvira still looks exactly the same as she did in 1987, but the revival of her late night shtick (using the same exact formula as it did in its original run) only demonstrated that we can't go back, we can only move forward. 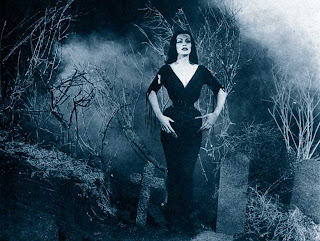 Here in LA, we're fortunate enough to have repertory theatres like Cinefamily and the New Beverly that drag out the classics week after week to expose a whole new generation to the joy of cinephilia. Nostalgia and kitsch are back in the hipster zeitgeist where they belong.  The good folks over at Shout Factory (the good people who brought us the Jem and Thirtysomething DVDs) were paying attention to this rash of sold-out horror screenings (each more obscure than the last) and Scream Factory was born.   A lot has been made of Scream Factory's recent slew of blu-ray restorations and the hype is well earned.   They're rapidly becoming the Criterion Collection of horror.  Now we can all can host our very own curated late-night movie marathons! 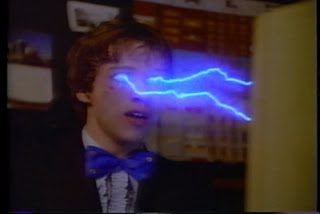 It’s thanks to Scream Factory that I discovered my favorite film of the summer, The Video Dead. 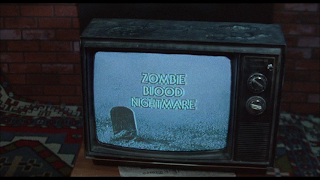 I know I can be a hard bitch, but once in a while a movie comes along that sweeps me off my feet and makes me feel like a giddy eleven year old sneaking downstairs late at night to watch scrambled pay-per-view in the living room with the volume turned all the way down. The Video Dead is such a film.

With an electric synth score and prominently featuring many "actors" who wear high-waisted denim and appear to struggle with the English language, this movie has it all.  The Video Dead is about a brother and sister named Jeff and Susy who inherit an indestructible television that zombies come out of unless it’s covered in mirrors - aka: it's the stuff that pre-adolescent dreams are made of. 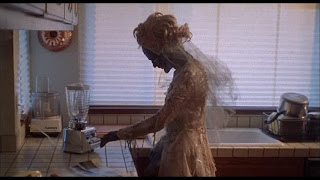 Last month, I was heading out to a party in Laguna and I couldn't decide which shoes to wear.  I've developed a weird habit of leaving yesterday’s shoes outside the front door – so I was trying on a couple pairs of dress shoes on my front porch when a platinum blonde barefoot girl charges at me.  Apparently I have a new neighbor.  Within three minutes, I was informed that she loves gay people and that I shouldn't get upset if I hear her yelling “Faggot” because she’s family and that her Facebook wall is full of rainbow flags.  Then she asked if I was a bottom and invited me to a party hosted by one of the Real Housewives of Miami.

Miami?  Really?  Anyone with a lick of common sense would know that I like The Real Housewives of New York.  Pay attention, please!  Stone-faced, I told her I liked her pedicure and pad-locked my door.

This is basically what happens to my namesake protagonist in The Video Dead. 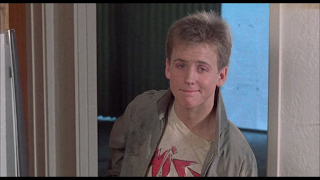 Jeff doesn't like to wash or change his clothes.  He lives with his sister, Susy, who is a college freshman majoring in aerobics with a sensible minor in "Music Videos".  She just bought her first house.  An obnoxious blonde girl ingratiates herself to her new neighbors and the next thing you know, zombies are pouring out of the television.

This is why we must avoid talking to strangers (especially manic girls who think they're sexy)! 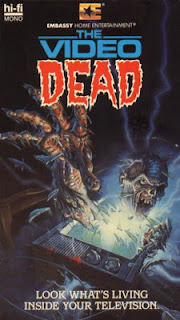 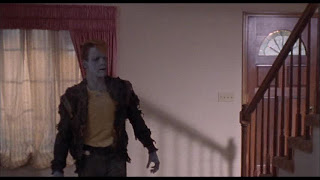 When the zombies start doing what zombies are wont to do, Jeff takes to the woods with a creepy old man and a chainsaw.

You know I love a movie where the boy takes on a Final Girl role and this is a good one - Jeff runs and falls and yelps and even gets tied up.  Watch out, Amy Steele, somebody's coming for your spot!

Shot on 16mm, The Video Dead was a movie made for the booming '80s home entertainment market – produced fast, cheap and locally and then gussied up with fantastic box art to spark a thousand adolescent imaginations for thirty years to come.  This is the pulp nonsense movie that those V/H/S movies wish they could be.

We're older than we ever intended to be, but thanks to Scream Factory, we can relive the majesty of Up All Night horror movie marathons in the comfort of our own living rooms without having to stay up all night or having the face the indignity of waiting in a line outside a sold-out screening with 100 fanboys in black t-shirts loudly talking at each other.  The future has its perks.
Posted by jeffreygmm at 2:02 PM