how meta can you get?

"What am I supposed to go to college?  Grad school?  Work!?" 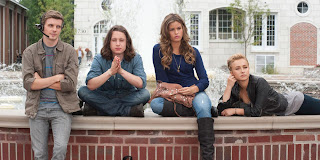 This movie is good. 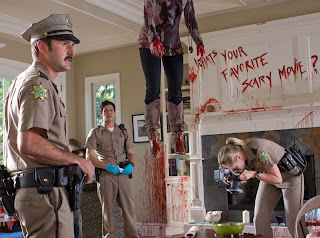 Nothing in the movie is bad.  Well nothing except for the god-awful presence of that dippy girl from the Friday Night Lights show who needs to stop being in movies.  Full stop. 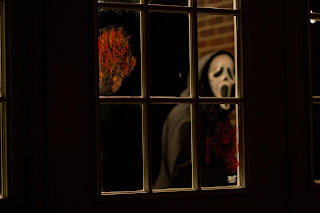 Going in, I think we all had our theories as to how a new Scream trilogy could be relevant today. Obviously Sydney would have to die in the opening. Obviously Sydney would wind up being the killer, vanquished only by Gail Weathers in a stab off leaving a whole cast of doe-eyed teens to carry on the legend of Ghostface.  I’m happy to report back that we were dead wrong. Scream 4 is better than any of us could have imagined.  Williamson does, in fact, know best.

While the original Scream loved its teenage protagonists, Scream 4 stabs into them with Chayeskian zeal.  This movie is rock'n roll, spitting in the face of an entire generation who have defiantly rejected narrative storytelling.  Scream 4 loathes the A.D.D. culture engendered by a twenty-four hour news cycle.  Scream 4 hates Taylor Lautner, and the Jersey Shore.  Scream 4 does not want you to leave your iphone on the dinner table - it's rude.  Scream 4 is lashing out at tweens who just expect fame and fortune because they see it on television, gutting Rebecca Black like a school of carp in its wake.

In this arid climate where theatrically released, big budget horror movies are ostensibly dead, Scream 4 is everything - a long lost postcard from the nineties sent to remind us that things used to be really good.  Believe it or not, it's been nearly fifteen years since a celebrity was famous for actually having some modicum of talent. In an America that is trying to pass off Donald "Rosie is a fat pig" Trump as a serious political contender, Scream 4 is mad as hell and it's not going to take it anymore.  While I hate to draw lines in the sand like that dreadful Tea Party (that doesn't help anyone), if you can't at least appreciate this film for its pinsharp social commentary then you are no longer invited to my Sunday brunches. 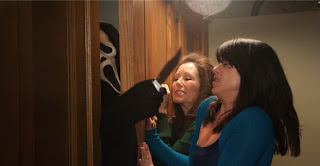 There are gay characters, sure.  More importantly, though, Scream 4 is post-gay movie. We homos don't have to live in subtext anymore - being gay doesn't make you the psychopathic serial killer it did in 1996. Gays and straights coexist and can even band together to get through the night. We’ve come a long way, baby. Listen - just because we don’t have to live in the shadows or act out in shame, that doesn’t mean that Scream 4 isn’t a gay movie. Trust me, there were more queens packed into the Acrlight Cinedome last Friday than at the Elton John's Baby Shower. People dressed up like Drew Barrymore, people brought their dogs – it was like gay Christmas!

"Don't fuck with the original."

If we gays love one thing, it’s a strong female protagonist and Scream 4 delivers them in abundance. Aside from Hayden Pantypants and her fabulous haircut, this is the film where Sidney Prescott officially surpasses Laurie Strode as the Queen of franchise horror. Neve Campbell is remarkably tuned in. While she clearly could have given a shit about Scream 2 or Scream 3, in this go around she is serving us Final Girl 2.0. Sydney has become a hero, someone who can go head to head with the object of her dread and maybe even come out ahead. Her return to the small town that made her is electric.﻿ This movie is fresh, it's funny, and it reminded me why I used to be scared to use movie theatre restrooms. 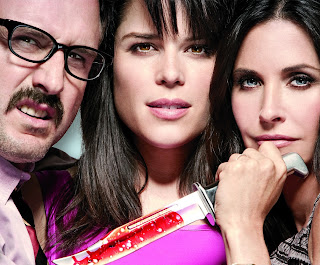 Alas, Scream 4 was a flop at the box office this weekend  - proving once and for all that people don't want ideas or compelling characters with climactic denoument in their movies.  They want bunnies who poop jelly beans.   So, if you haven't already, go and see Scream 4 and then go and see it again. Do it for our country, dolls.  Don't let the terrorists win.

xoxo
Posted by jeffreygmm at 10:09 AM