"You know I saved you a lot of embarrassment by not balling you out in front of the other kids." 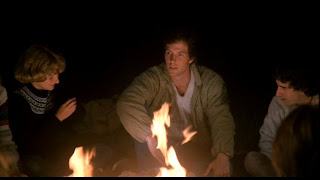 I'm going to confess something.  Maybe you should sit down. 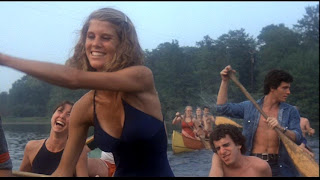 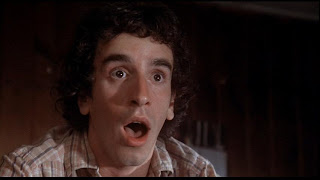 I know.  Shocking.  I learned enough about the outdoors from my movies.  Had I been privileged to one of those childhoods with two parents who eagerly passed me off to complete strangers in the unprotected wilderness, I'd have wanted it to have been just like The Burning (1981). 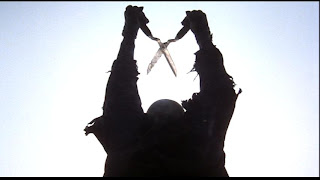 I'd want my fellow campers to be the likes of Holly Hunter, Jason Alexander, and Fisher Stevens.  I'd want a really gorgeous counselor in fitted, high-waisted jeans saving me from a maniac wielding pruning shears.  I'd lie in my cot (after unpacking my Madeline Weinrib throw and twizzlers) and write in my diary for hours on end about counselor and I could live happily ever after in a Hamptons summer house with a tire swing and oversized kitchen.  I wish this line of thinking was original, but it's actually just what happens in The Burning. 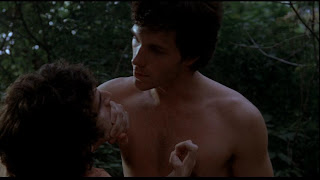 The boys at Camp Blackfoot are quite the miscreants.  Not only can the afford summer camp when many boys are left to sit in front of the television all summer, but they have to flaunt their wealth by ganging up on the help.  For whatever reason, the target of their contempt happened to be the disfigured caretaker, Cropsy. To really drive their point home, they stole into the shed where Cropsy was enjoying his nightly alcohol-induced blackout (as caretakers are prone to do) and they burned him alive. How rude. 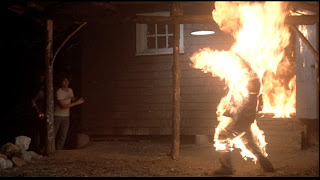 You can't keep a good caretaker down.  Five years go by and Cropsy is back at Camp Blackfoot, ready to resume his position.  The only snag is that one of those little rascals, Todd, has come back as a counselor.  Todd's a hot piece who loves denim - a man after my heart. Todd's so hot, in fact, that it sends Cropsy off on a vengeful killing spree throughout the campgrounds. 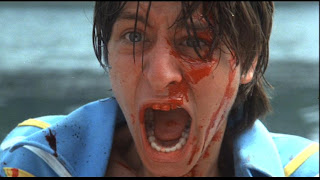 All the girls love Todd, but they're barking up the wrong tree. He's only concerned for their well being and for fostering the camp's one gay boy, Alfred, into self-acceptance.  Alfred is a Jewish gay who gets bullied by all the other campers. Todd is his ally. He's always there with a patient ear or a lingering hug. Their relationship is touching. At the end of the movie, it's not a big-titted lady with no bra who is being attacked by the mutilated monster, it's Alfred - and you can bet Todd is there to save him. 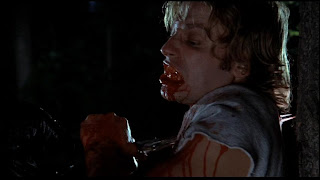 Campground realness abounds in The Burning.  It came out the year after Friday the 13th (also a movie about campers in high-waisted denim) so it never got the recognition it deserved.  The kids are acting their balls off, giving a sincerity seldom seen in more mainstream fare, and they're actually kids (something sorely lacking in other camper movies - there are always an abundance of counselors but never actual kids) . Tom Savani did the makeup and his work here is unquestionably superior to that of the Friday the 13th films.  The raft scene is one of the best moments in horror movie history.  The Burning was the first Miramax movie, inadvertently paving the way for The Piano and The English Patient in the years to follow.  The Weinsteins were nothing if not progressive when there was a dollar to be made.  Despite it being gayer than a Terrence McNally play, this movie also deals with female sexuality with an honesty seldom seen in the slasher genre.  Girls have sex drives just as potent those of teenage boys. Who knew? 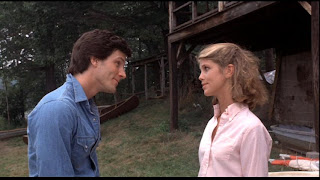 While never quite audacious enough to feature its hero performing disco cabaret numbers in his best glittery, gold sunglasses, The Burning has a queer protagonist (if not more).  If you haven't been paying attention, let me give you a quick refresher course:  when a movie has a male protagonist being chased by a maniac hell bent of penetration (whether with a knife or with his penis), it's a gay movie - and this is a good one! 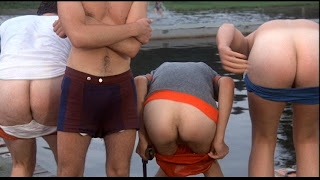 Posted by jeffreygmm at 5:27 PM