Just when you think you're all by yourself, you're not.

"It is an abomination to God and to man." 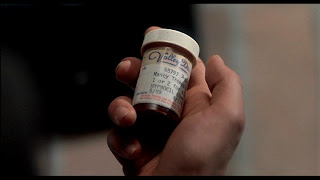 Growing up in the breathless heights of domestic horror distribution was a glorious thing. My mother was always working, leaving me to my own devices for days on end. One time Mary tried to get me involved with the local church youth group to ease her guilt. They gave me a butter cookie and took me on a tour of the grounds.  It was too perfect with the vintage stained glass and oak pews! Within ten minutes, I was acting out my favorite scenes from Return of the Living Dead Part 2 in the sanctuary and they asked me to never come back. 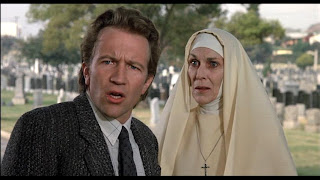 I cannot be held responsible for such a seemingly brazen breach of etiquette. It’s what any little gay boy would have done.  In the 1980s, sequels were rarely ever carbon copies of the original film. Far from it! These continuing adventures became so progressively phantasmagoric that they begged for playground reinterpretation. Believe me, there was no better playground role-playing than A Nightmare on Elm Street 3: Dream Warriors (1987). 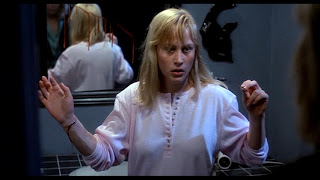 Refusing to be a tired rehashing of A Nightmare on Elm Street, Dream Warriors is indicative of everything that’s missing in franchise horror today. 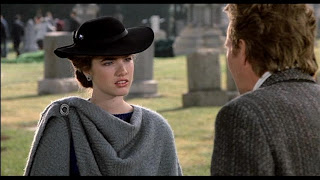 It has a story.
With a viable story, there was a reason to continue the franchise. Final-girl Nancy Thompson is a post-graduate intern now.  Despite the platinum highlights around her bangs indicating the terror that she'd survived at the hands of Freddy Krueger, her hair is more voluminous than ever!  She has a penchant for wearing Nolan Miller gowns, Laura Ashley prints and she can’t be bothered with acting anymore.
A Nightmare on Elm Street 3 is about what happens to final-girls after they live to see another day. Without being bogged down in expository monologues, Dream Warriors successfully expands the mythology of Freddy Krueger. We learn that Freddy was the bastard son of a hundred maniacs. We learn that his insatiable teenage bloodlust is not just prompted by revenge; rather his physical need to feed off of the souls of these kids in order to stay alive and powerful. Scary business! 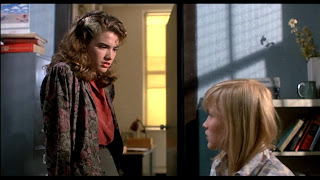 "If your only faith is science...it may be you who is laid to rest." 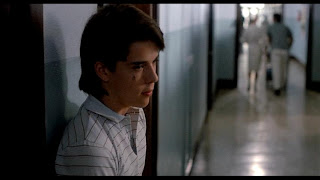 It has a concept behind it.
Imagine if you will, Girl, Interrupted or One Flew over the Cuckoos’ Nest. Troubled teenagers are living in a lockdown mental health facility. They are bewildered by recurring night terrors. Apathetic and underpaid nurses administer medication with no regard for these kids’ horrific tales of a burned maniac trying to kill them in their dreams. One by one they start dying off. 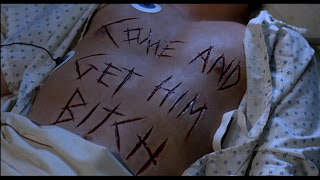 "She was raped hundreds of times." 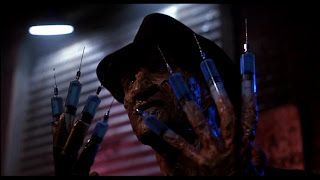 It's High-Concept.
Did I mention that the kids at the Westin Hills Psychiatric Hospital are X-Men? Oh, yes. Kristen Parker is not only an Olympic gymnast; she also has the uncanny ability to drag people into her dreams. Her tramp mother sent her off to the nut house rather than actually having to talk with her. Hungry for a role model, Kristen pulls Nancy into her nightmare. Worlds collide.
Contrary to slasher decorum, none of our characters are disposable.  Everyone contributes to the story at large. There's a nebbish, brunette boy with glasses in a wheelchair that can turn into a magical, laser-spewing wizard.  There's a Jewish girl who turns into a knife-wielding punk rocker. There's even a black kid with super-human strength. X-men indeed! These kids are rejected by society; locked away to rot by apathetic parents.  Like X-Men, Dream Warriors is a social commentary on the nature of freaks - whether a homosexual or a disenfranchised teenager, everyone has felt misunderstood and misrepresented by the powers that be.
When you feel isolated, you can easily lose yourself to depression and self-pity.  That's when you're vulnerable and that's when Freddy comes. There is strength in numbers, kids.  It doesn't matter if you're a girl; it doesn't matter if you're a gay; it doesn't matter if you're not an actress.  No matter how lonely you feel, no matter how misunderstood you may be, there’s always someone who has it worse - someone who has been there and lived to tell the tale.  A Nightmare on Elm Street 3: Dream Warriors makes this point crystal clear.  Furthering its message of group empowerment and girl-power, this film doesn't have a final girl, it has a final gang. 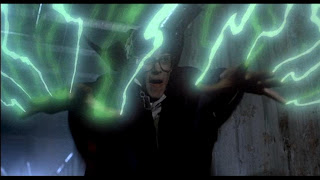 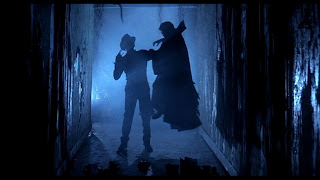 While this movie deals with themes of drug abuse, conflicted sexuality and the sins of morally bankrupt parents forever haunting their children, it's a lot of fun!  With graphic kills and minimal Freddy screen time, this movie scared the dickens out of me as a child. I had a VHS copy that I'd watch and then promptly hide in my mom's room for fear that Freddy himself would materialize out of the cassette and haunt my dreams like Patricia Arquette!   The end made me sob.


Parents take note: if your little boy is sobbing from the emotive powers of Heather Langenkamp, he may be a gay.  Prepare accordingly. 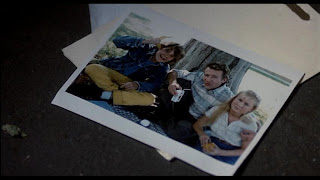 Through creativity and a willingness to explore new terrain, A Nightmare on Elm Street 3: Dream Warriors re-launched a franchise left for dead.  The fun was only just beginning...
Posted by jeffreygmm at 11:10 PM