Has your best friend ever dated a girl that you can't stand so you wind up seeing him less than you normally would just to avoid her ugly sweaters and ill-conditioned tips?  You know very well that, despite what you tell your other friends, she's not actually retarded, so she can tell you hate her.  But it's not like you're gay for your bestie and so you just leave it be; you don't even launch into a dramatic dialogue as it starts to rain, causing your nipples to poke out of your Donna Karen top.  Listen, if you ever thought that maybe you should try and make an effort to connect with your bestie and his hateful cunt girlfriend as a couple by taking a day trip, don't go skiing. 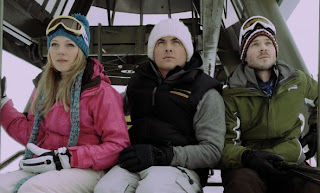 I've never been skiing and I certainly won't be skiing any time soon after seeing Adam Green's Frozen (2010).  Bobby Drake left Professor Xavier's School for Gifted Youngsters and he's living as a stoner from Boston who loves his bestie, Kevin Zegers, and hates his bestie's girlfriend, Emma Bell.  Like any good episode of Three's Company, circumstance finds them trapped on a ski lift together where they have no choice but to resolve their differences and talk it all out!  Then the wolves begin to circle... 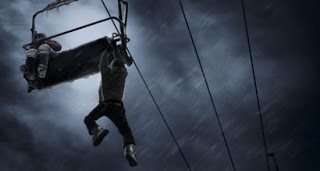 Even though I may not be wild about this film, Boston is very well represented with references to Papa Gino's (anyone from Boston knows that no birthday was complete without a hand-made pizza and getting to play "Oh Industry" on the jukebox) and dialects that come and go (this is an affliction that true Bostonians suffer from - we don't always go around talking like Shutter Island day players).  Frozen is thoughtfully plotted and thoroughly disturbing.  I was so curious as to how it would all turn out that I barely minded the fat people who were having full blown intercourse in the row behind me.
Posted by jeffreygmm at 1:22 AM